Who is Ted Nugent’s super duper superfan? Wisconsin governor Scott Walker — and he’s not afraid to talk about it! 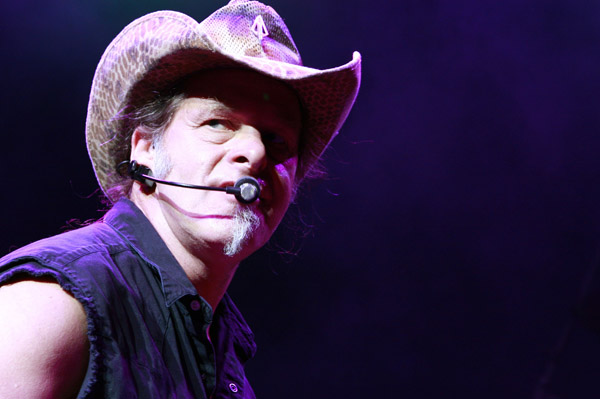 It seems like everyone in the political world is shying away from outspoken conservative rocker Ted Nugent — even Mitt Romney, the candidate he was speaking for when he made those unfortunate comments about Barack Obama at an NRA rally.

“If you want more of those kinds of evil anti-American people in the Supreme Court, then don’t get involved and let Obama take office again. Because I’ll tell you this right now: If Barack Obama becomes the president in November, again, I will either be dead or in jail by this time next year,” the “Cat Scratch Fever” singer said.

Nice, right? Nugent says he was talking about making a change at the ballot box, but that still hasn’t made his Republican counterparts — concerned about the election — buddy up to him.

Well, except Wisconsin governor Scott Walker. The embattled Walker got a bit nostalgic on Wednesday about meeting the rocker at a Milwaukee rally a couple of years ago.

“The best part was I got to meet Ted Nugent before he played the ‘National Anthem’ on his guitar,” he said in the interview on a Wisconsin television station. Then again, Walker is having some political troubles of his own — he’s facing a recall election in June.

As for Romney? He hasn’t said anything publicly about it, other than a statement from his camp imploring people to keep everything “civil.” They weren’t worried about the connection in March when Nugent announced his endorsement.

As for Nugent, he’s meeting with the Secret Service today to talk about the comments, though we’re not sure what either side will accomplish.

“We actually have heard from the Secret Service, and they have a duty, and I salute them,” the 63-year-old singer told Glenn Beck on Wednesday. “I support them and I’m looking forward to our meeting tomorrow.”