Former Sabrina, the Teenage Witch star Melissa Joan Hart is gearing up for her new role: Mom times three! Find out about her pregnancy — is she already revealing the baby’s sex? 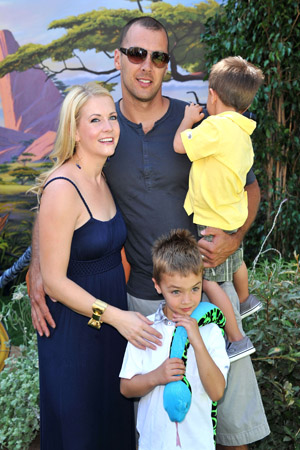 What does Melissa Joan Hart have in common with Anna Paquin, Tori Spelling, Drew Barrymore and Reese Witherspoon? They’re all female actresses, naturally — and they’re all expecting! The former Clarissa Explains It All and Sabrina, the Teenage Witch star revealed Wednesday that she’s pregnant with her third child.

“(Early) Happy Birthday to me!” Hart tweeted on the eve of her 36th birthday. “And baby makes 3!”

The actress — married for nine years to Mark Wilkerson — has two boys, Braydon, 4, and Mason, 6.

“I adore my boys to pieces! And if that’s all God grants me, I’m fine,” Hart told People a few years ago. “But I know myself well enough to know that I’m going to want another baby.”

The big question now: Will she have another boy, or will she get a girl this time? She isn’t telling yet, but she’s said it’s not a big deal if she has all boys.

“It’s not necessarily that I want girls,” she told the celebrity weekly. “It’s because I just know I want more babies.”

The mom-to-be will still be busy, despite her pregnancy: Her show with Joey Lawrence, Melissa & Joey, will be back on May 30. She also has a successful candy and yogurt store in Sherman Oaks, California. The actress gained a bit of negative attention last year when a former store manager sued her and her business associates, claiming racism. Hart denied the charges.

We can’t imagine she’d be involved in something like that, especially given her family and views on being a good role model.

“I’m the oldest of eight kids and have always behaved myself because of them, I always wanted them to look up to me,” she told Women’s Day in an interview. “When I did the Maxim shoot, I was really proud of it because I was doing something grownup. But when my brother told me it was getting thrown in his face at his high school, I decided I wouldn’t do anything more risqué than that. The industry is different now with so many media outlets, but there are a group of us from my generation who want to do the right thing. We all want to have a real life outside of work with a family and kids.”