Josh Hutcherson’s charity work with the group Straight But Not Narrow not only brings The Hunger Games star a sense of pride, it honors two of his late family members. 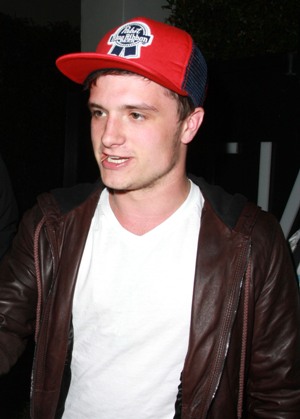 Josh Hutcherson’s family pain has inspired the actor to work with the charity Straight But Not Narrow. The loss of two uncles to AIDS keeps The Hunger Games actor working hard for equality.

“They were in their early thirties, in great shape, but unfortunately they were taken away from us too soon,” Josh Hutcherson revealed to E! Online. “Both passed away at about the time I was born.”

Fighting for a cause they believe in has become a bit of a Hutcherson family tradition. The 19-year-old, who was born in Kentucky to Michelle and Chris Hutcherson, shared, “My mom has always been a big advocate, especially in the gay, lesbian, transsexual and bisexual community, so for me it’s always been a part of my soul.”
This Saturday, Josh Hutcherson will become the youngest recipient of the Vanguard Award at the GLAAD Media Awards in Los Angeles for his work with the group Straight But Not Narrow.

“This is what my family is most proud of and the same for me,” Hutcherson said of his work supporting equal rights. “Acting is one thing, but actually trying to change the world and the way people think to make people’s lives better? That’s the stuff I’m most proud of.”

Josh Hutcherson thinks alcohol, like war, is fit for teens >>

When asked if he believes his two uncles are looking down on him from above, Josh Hutcherson replied, “I’m not a religious person in that sense. But at the same time I do believe in some sort of something, just not sure exactly. But yeah, I’d like to think that they see what I’m doing and that they’re proud of me.”