Teen bride Courtney Stodden is counting down the days to her 18th birthday, and wants the world to join along. The young wife of Doug Hutchison makes her YouTube video series debut with “My Foot Hurts.” 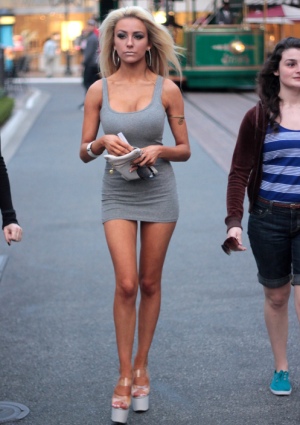 After Aug. 29 Courtney Stodden will no longer be an underage bride. The wife of actor Doug Hutchison is making the most of her final days free from the responsibility of voting with a new series of YouTube videos.

The series, entitled “Courtney’s Countdown” kicked off Monday with a new video and message posted on the teen bride’s YouTube account.

“Episode 1 in the continuous YouTube series of Courtney’s Countdown to her 18th birthday,” the description reads. “Watch her as she deals with a sprained foot injury. 135 days and counting…”

The first video, aptly titled “My Foot Hurts,” appears to be a homemade reality show, focused on its star wearing skimpy clothing, ordering skimpier clothing for a new photo shoot and debating the safety of sky-high heels with husband Doug Hutchison.

Courtney Stodden’s YouTube video starts out with the PETA spokesperson moaning “my foot hurts” while wearing insane heels and a tight dress around the house. Next viewers with an age-verified YouTube account are treated to the teen bride’s phone conversation with her mother/manager, where she once again complains of foot pain while planning an outfit for an upcoming photo shoot.

“I want a really tight, tiny dress, as always,” Courtney Stodden can be heard demanding.

We next find the video’s subject wearing next-to-nothing while sitting on the couch next to 51-year-old husband Doug Hutchison, still moaning about her foot. “It’s the shoes, baby, I’m telling you,” he tells her, exasperated. “Stop wearing the shoes!”

The 17-year-old is pictured here shopping at The Grove last month in shoes nearly identical to the “My Foot Hurts” culprits.

By the time Courtney Stodden’s over five-minute YoutTube video wraps up, we find the teenager has gone to the doctor and been told her foot was sprained during a recent photo shoot which involved jumping.

“It’s not because of my shoes,” viewers see her happily tell Hutchison of the doctor’s diagnosis. “What do you think of that?”

It’s fair to say reaction to the “My Foot Hurts” video has been mostly negative. One YouTube user commented, “This is nothing more than an online pilot for the reality TV show they’re desperate for. And every comment is just another nail in the coffin, ensuring it goes ahead. We have only ourselves to blame.”

Another pointed out the irony of the teen bride’s age and YouTube’s video restriction, writing, “Per the terms and conditions of Google, she isn’t even old enough to watch her own video.”