Ted Nugent is being investigated by the Secret Service for some strongly-worded statements he made against President Obama. Was he really making threats? 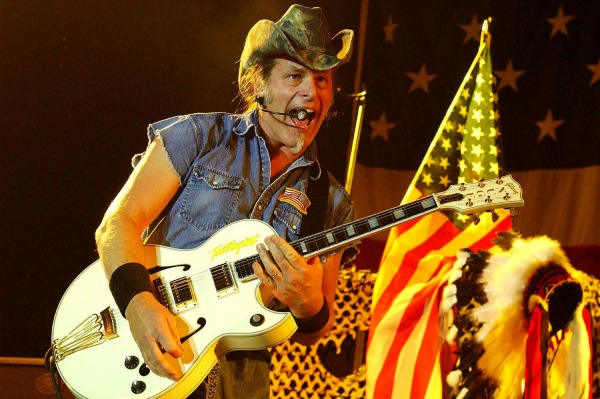 The Secret Service would like to have a little chat with Ted Nugent after the musician/NRA spokesman made some statements about the President that could be interpreted as threats of violence.

In an interview on Glenn Beck’s radio talk show Wednesday Nugent revealed, “We actually have heard from the Secret Service, and they have a duty, and I salute them. I support them and I’m looking forward to our meeting tomorrow.”

Nugent insists, however, that the comments in question — made at an NRA rally — clearly referenced fighting back at the voting booth, not literal violence.

“Every reference I made, whether it’s a shot across the bow or targeting the enemy, it always ended the sentence with ‘in November at the voter booth,'” Ted Nugent told Beck.

What exactly did the rock star say to get himself in such deep doodoo? Two things specifically.

One: “If Barack Obama becomes the president in November again, I will either be dead or in jail by this time next year. We need to ride into that battlefield and chop their heads off in November.”

Two: “If the coyote’s in your living room, pissing on your couch, it’s not the coyote’s fault. It’s your fault for not shooting him.”

We can see why the Secret Service would be a smidge concerned. While they declined to comment specifically on whether or not an investigative meeting was scheduled, they did acknowledge their concern.

“We are aware of the incident with Ted Nugent, and we are conducting appropriate follow-up,” said spokesman Brian Leary in a statement. “We recognize an individual’s right to freedom of speech but we also have a responsibility to determine and investigate intent.”