Ladies, prepare yourselves.The first trailer for the stripper flick Magic Mike has hit the internet. Channing Tatum, Alex Pettyfer and Matthew McConaughey are just a few of the good men who may bare it all in the upcoming film. 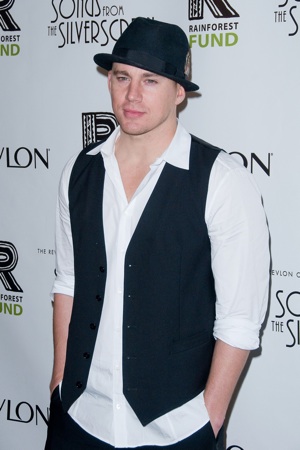 Take it off! That’s what ladies usually say when Magic Mike enters the room. He’s an exotic male dancer, played by the gorgeous Channing Tatum.

Magic Mike is loosely based on Tatum’s life as a stripper before he became a model and actor.

Mike is a dancing superstar who takes an up-and-comer named The Kid (Alex Pettyfer), under his wing. He also gets involved with a young woman (Cody Horn) who’s less than thrilled about his choice of employment.

Is Mike willing to give up his X-rated lifestyle for true love? Will he realize all that glitters isn’t gold?

Hollywood has been buzzing about Magic Mike for months and now we’ve finally got a look at the finished product.

Some of the hottest actors around appear in the film including, Matthew McConaughey, True Blood‘s Joe Manganiello and White Collar’s Matt Bomer.

Magic Mike also has its fair share of female beauties. During the trailer we briefly see Olivia Munn, looking stunning as ever. While Jessica Biel and Riley Keough also co-star.

Jessica Biel to take it off in stripper flick Magic Mike >>

Watch the first trailer for Magic Mike below:

Magic Mike is directed by Steven Soderbergh from a script written by Reid Carolin. The film opens in theaters June 29.

What do you think of the first trailer for Magic Mike?