Mariah Carey talks to Shape magazine and reveals she lost 70 pounds through Jenny Craig. She shows off her amazing new figure on the cover of Shape with a nautical-themed bikini. 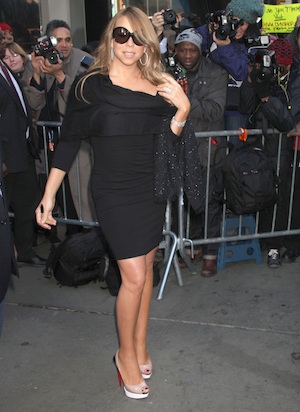 Summer is quickly approaching but if you’re Mariah Carey you’re probably not too worried about lounging around in a bikini. The 42-year-old mother of twins — Moroccan and Monroe — looks amazing on the recent cover of Shape magazine. Posing in a striped navy blue-and-white crop top with white bikini bottoms, it’s hard to believe the pop icon weighed 30 pounds more just three months ago.

Mariah revealed her significant weight gain during the pregnancy — around 70 pounds — and explains most of it was water weight. “I put on around 70 pounds,” Carey told Shape magazine. “But if you look at the photos of me when I was pregnant, you’d say, ‘Wow, she gained 9,000 pounds!’ A lot of it was water weight because I pretty much had head-to-toe edema, which is very painful. Luckily, all the swelling went away fairly quickly after the babies were born. Then I had about 30 more pounds to drop. I have such empathy for people who need to lose a lot of weight, because I know what they’re going through. I remember thinking at the time, ‘I’ll never look or feel the same again.'”

Carey attributes most of her weight loss to diet. “I used to be able to slim down just by exercising more, but that’s changed,” explained Carey. “Since having the babies, I realize that 90 percent of losing weight is my diet.”

Mariah Carey is the most recent spokesperson for weight loss and nutrition company Jenny Craig. Previous celebrity endorsers include Kirstie Alley — who claims to have lost 75 pounds with the program.