Long before Chris Evans was a movie star he was an awkward high school boy who could hardly land a date. The Avengers star talks to Playboy about his humble pre-heartthrob days. 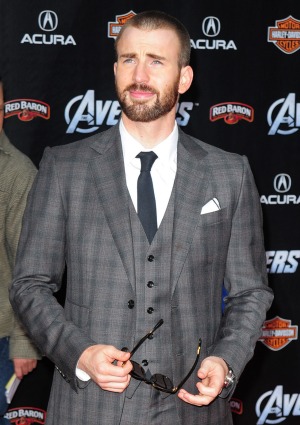 Chris Evans is fast becoming a Hollywood hit, but the man who plays Captain America in The Avengers wasn’t always the talk of the town.

“Look at pictures of me growing up. It wasn’t always the way it is now. It was a bumpy road for me,” Chris Evans told Playboy during a recent 20 questions interview. “There were kids doing a lot more than I was in high school. I just wasn’t there, I guess. I lost my virginity senior year. It happened one time and only one time.”

Evans, who was raised in Boston, admits to at least one celebrity crush from his youth. “I used to be in love with Sandra Bullock when I was growing up. Sandy B. was my girl,” he shared. “I remember seeing Speed when I was in seventh grade and just thinking, that’s her.”
“I wish you could see some of the girls I have genuinely had crushes on in my life,” the actor went on to say, “They’re not the girls you would assume.”

“I like girls who are self-deprecating. I like girls who make fun of themselves. If you can’t poke fun at yourself, what are you? I just want someone with a good soul. That’s about it. The rest I’m really flexible on. I like a good a**, though. I will say that.”
One woman who’s always on Chris Evans’ side is his mother, who has been known to bicker with internet users who say unflattering things about her boy.

“Yeah, she’s one of those moms,” the 30-year-old admitted. “She gets a little up in arms. The internet is a big place where a lot of people can voice their opinions, and my mother chooses to pick fights with random people from all over the world who don’t have the nicest things to say about me.”