The news of Dick Clark’s passing has been difficult to digest. New Year’s Rockin’ Eve successor Ryan Seacrest shared his words on the loss. 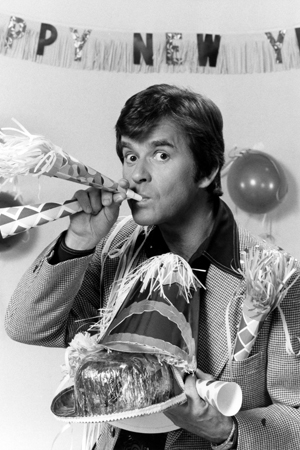 Dick Clark practically educated today’s biggest musicians while making history with American Bandstand, and has become a household name synonymous with New Year’s Eve. The news of his passing earlier today from a heart attack has Hollywood in mourning.

Two years ago, Ryan Seacrest stepped in as host of Dick Clark’s New Year’s Rockin’ Eve on ABC, when a stroke left the legend partially paralyzed. The American Idol personality issued a moving statement to remember his friend and mentor.

“I am deeply saddened by the loss of my dear friend Dick Clark. He has truly been one of the greatest influences in my life. I idolized him from the start, and I was graced early on in my career with his generous advice and counsel.

“When I joined his show in 2006, it was a dream come true to work with him every New Year’s Eve for the last six years.

“He was smart, charming, funny and always a true gentleman. I learned a great deal from him, and I’ll always be indebted to him for his faith and support of me.

“He was a remarkable host and businessman and left a rich legacy to television audiences around the world. We will all miss him.”

Rest in peace, Dick Clark. To echo the countless celebrity condolences on Twitter, you will be missed.

Ryan Seacrest and NBC family team up for Olympic gold
How is Jennifer Lawrence’s low self-esteem taking all the fame?
Celebrities targeted by the Kony 2012 campaign