Beloved television personality and pop icon Dick Clark died today at the age of 82. Read on to find out more about his hugely successful life and career. 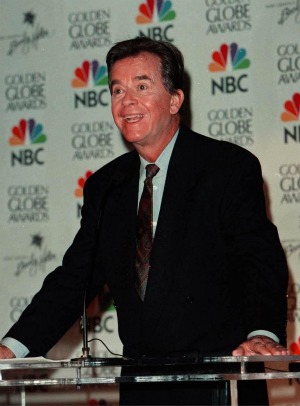 It’s a dark day for music and television fans. America’s Oldest Teenager Dick Clark has died, his rep confirmed. He was 82 years young.

The longtime American Bandstand host suffered a “massive heart attack” this morning and could not be resuscitated, according to rep and agent Paul Shefrin.

Clark began his career on radio station WRUN in upstate New York filling in for the weatherman and general announcer. After spinning records on WFIL in Philadelphia, he landed his gig on American Bandstand — and the rest is history. Five years later Clark was a household name, and he was hosting the world’s biggest musical acts: Everyone from Elvis Presley to Madonna, from 1956 to 1988.

After becoming synonymous with mega TV hits like the $25,000 Pyramid, TV’s Bloopers and Practical Jokes and the American Music Awards, Clark moved into the realm of TV god by creating the American television tradition Dick Clark’s New Year’s Rockin’ Eve in 1972.

Clark counted down to midnight as the ball dropped in Times Square until 2004, when a stroke nearly felled the legend, leaving him partially paralyzed and barely able to speak. But he was back in 2005, albeit with still slightly impaired speech, telling viewers, “I had to teach myself how to walk and talk again. It’s been a long, hard fight. My speech is not perfect but I’m getting there.”

He returned every year since, joined by Ryan Seacrest starting in 2006.

According to the Museum of Broadcast Communications, Clark and his production company churned out over 7,500 hours of television in the course of his career, including over 300 series, 250 specials and 20 movies for both film and TV — earning him five Emmys including a Lifetime Achievement Award and induction into the Hollywood Walk of Fame, the National Radio Hall of Fame, the Broadcasting Magazine Hall of Fame, the Rock and Roll Hall of Fame and the Academy of Television Arts and Sciences Hall of Fame.