It’s confirmed — the Beek will hit the ballroom dance floor! Or, at least, a version of him will. His heightened character on Apt 23 is going for the mirror ball trophy! 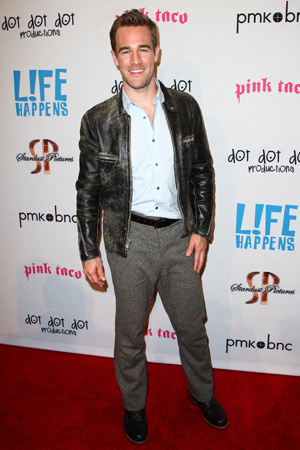 Though Dancing with the Stars is currently in its 14th season, we have yet to see anyone from Dawson’s Creek take the ballroom dance floor.

That’s all about to change. James Van Der Beek suggested to the show creator of Don’t Trust the B—- in Apt 23 that his onscreen version of himself should compete for the mirror ball trophy, and it looks like the Beek gets what he wants!

“It’s something that we’re building toward from Episode four or five, when I decide to do it,” said Van Der Beek to The Hollywood Reporter. “In this character’s mind, it becomes the brass ring: That’s going to be the thing that’s going to reintroduce him to the world. That mirror ball trophy is going to launch his career and you see him get completely obsessed and fixated on this thing the way a lot of actors do about a certain role or award. The mirror ball becomes our metaphor for that.”

Van Der Beek is happy to be back on television, and he wouldn’t be able to return to this line of work if it weren’t for his family. “The reason I could do Apartment 23 is I’ve had a kid. It’s changed my life in the best possible way and totally rearranged my priorities.”

He added, “It makes it much easier to go out and have a laugh at your own expense when suddenly something comes into your life that shows you what’s really important. The show and how it’s being received — and even our time slot — I don’t know whether it’s just dumb luck or what. I’m incredibly grateful for it.”

We’re glad he’s grateful that audiences can watch him get made fun of every week. “When we started the show I said, ‘Don’t ever be afraid of offending me. Just go as far as you need to. If anything really offends me I’ll say let’s pull back.’ But that hasn’t happened.”

Why is Apt 23‘s Krysten Ritter fascinated by Alicia Silverstone?
Krysten Ritter: How to look good naked in Apt 23
Don’t Trust the B—- in Apt 23 pilot review: The new odd couple!