Fans get crazy showing their love for Jersey Shore and one particular homeowner of a very famous house isn’t very happy. 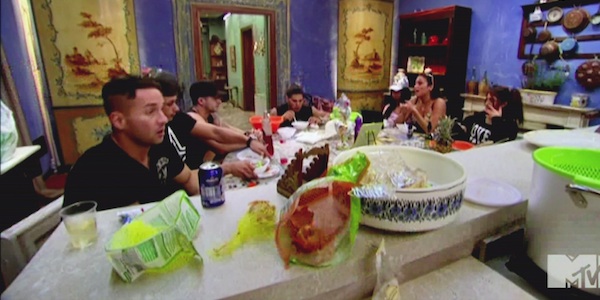 Fans of MTV’s Jersey Shore are showcasing their love for everything Snooki, The Situation and Pauly D by vandalizing the infamous Seaside Heights pad. The six-bedroom rental — available to those willing to fork over $3,500 per night or $6,000 per night on holidays — is now continually in need of a paint job.

TMZ reports that fans scribble notes on the outside of the home, perhaps odes or sonnets to their favorite cast members. “The realtor for the infamous house in Seaside Heights tells us… hoards of people keep tagging the outside walls with their names and random comments like, ‘We love you Snooki.’ We’re told the damage is so profuse… the realtor is forced to repaint the guido-smush den on a WEEKLY basis.”

Freedom! The Situation is out of rehab >>

The owner of 1209 Ocean Terrace must be making some significant extra rental income given the property’s value lists on Zillow for just over $450,000. To do some math for you, a 30-year mortgage on the ultimate party house at a respectable 5% interest rate would give you about a $2,500 a month payment.

Unfortunately for the owner, since Jersey Shore isn’t filming he or she has to foot the bill for the maintenance. If production was ongoing, MTV would be responsible for the damage, says TMZ.

Snooki gets fierce over baby amid cheating claims
Pill-popping Situation was like “Popeye on crack”
The entire Jersey Shore cast back for season six!