The complexities of parenting became the theme of the evening on last night’s Private Practice. 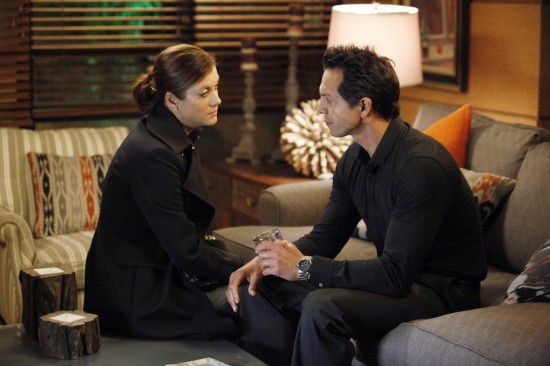 Private Practice has returned to television after a month-long break and a schedule shift from Thursdays to Tuesdays. If fans of the show have been confused and perturbed by the show’s erratic behavior, at least they can take comfort in the fact that not much has changed at Seaside Wellness since the events of last month’s “The Letting Go.”

First off, Mason remained in deep denial about his mother’s prospects for recovery. As Erica lay in her hospital bed, purple and moaning and barely moving her head, Mason waited at home and in Cooper’s care. He even drew a picture of himself with his mother and asked Cooper to hang it in Erica’s bedroom for “when she comes home.” Meanwhile, Charlotte stayed at Erica’s bedside, intent on comforting her in the waning days of her life.

Charlotte and Cooper’s struggle with how to address Erica’s imminent death fit nicely into the episode’s overall theme of parental responsibility, but it also felt like a retread of the events of “The Letting Go.” At the end of this installment, just as he did last month, Mason said a heartfelt goodbye to his mother.

Meanwhile, the practice dealt with an unusual dilemma as a woman who had been convicted of killing two of her children arrived pregnant with another. Jake, who had helped this woman become a mother in the past, wrestled with the repercussions of his actions as Addison helped the woman deliver her third child. That child was then turned over to his father, a man justifiably still enraged by the murders of his two other children. “This baby deserves a fresh start,” Jake told him, “just like you do.”

Violet and Pete tiptoed towards a fresh start of their own, in the wake of her breakup with Scott. Just as it was a month ago, the Violet-Pete storyline was fairly inert. With the drama of a cancer-stricken woman at death’s door and a pregnant woman with a criminal past already providing this episode with its juice, Violet and Pete’s bizarre romantic fumblings were a dull afterthought. By the time they decide whether they want to get back together, it’s likely that audiences will be hard-pressed to care.

Amidst all of the episode’s talk of motherhood and parenting and babies, Addison seemed perfectly satisfied with helping others through their familial affairs and seemed to have comfortably distanced herself from the need for a child of her own. But then, at episode’s end, we were hit with the hour’s biggest (and, arguably, only) surprise: Addison has a son!

Wait a second — how did that happen? Well, at the start of the episode, Addison helped a woman named Judy deliver her baby. That baby, named Henry, is now — much to Judy’s relief — set to be adopted by Dr. Montgomery herself. See how nicely things come full-circle for people who live in a fictional television universe?

Fans of Private Practice recognize that the desire to be a mother has been a powerful force for Addison since the series’ pilot. It was only by letting go of that need, in last night’s episode, that she was able to fulfill it. But what will this new child mean for Addison’s undefined relationship with Sam? Tuesday night, before the unexpected arrival of Addison’s motherhood, Sam said that his connection with Addison was one of the few things in his life that “makes sense.” Will this still hold true when Henry is brought into their lives?

Sam has been clear about his disinterest in raising a child. Can (or should) his mind be changed? Would Jake have a better response to this new development? Now that Private Practice has settled into its new night and has fresh episodes just around the corner, fans won’t have to wait long to find out.