She topped the Billboard charts with MDNA, but her own controversial behavior is now coupled with that of her daughter’s. What’s with the cig, Lourdes? 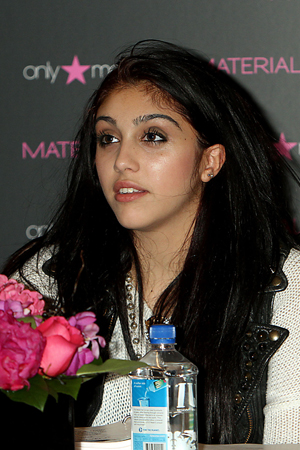 Madonna is used to being criticized for her own bad behavior, but it’s a completely different story when it comes to that of her daughter, Lourdes Leon. Her 15-year-old daughter was recently spotted smoking a cigarette, and her mother isn’t very happy about it.

“I think I am [a tough parent], but honestly, I don’t think I’m as tough as I should be. I think I need to be maybe tougher,” said Madonna in a new interview with Rock Center’s Harry Smith. “It’s hard — every day is a negotiation.”

She added, “But cigarette smoking, I’m not very fond of — for anyone. I don’t approve of anyone smoking cigarettes — most of all, my daughter.”

Smith pointed out that Madonna herself donned a cigarette in a recent video, but the pop legend responded, “I don’t smoke. That’s just an accessory, Harry. There’s a difference. She smoked that cigarette before I did that video! She didn’t get that from me.”

Is it hard to be Madonna altogether? “I imagine it must be — yes, it is. It must be hard, because I complain all the time,” she said. “We all have our challenges. To be a single mother of four and to work as much as I do, with my life in a kind of metaphorical fish bowl, it’s pretty challenging. But so far I’ve survived with sanity and humor intact.”

Yet the 53-year-old reassures that her kids know a different version of her than the public does. “To my children, there’s the one that comes home and says, ‘Have you done your homework?’ and ‘Why are you wearing that?’ and ‘Why did you say that?’ and ‘What are you eating that for?'”