Jason Segel knows no bounds when it comes to a burger craving. The actor describes one late-night diet meltdown that reduced him to literally eating off the floor of a taxi cab. 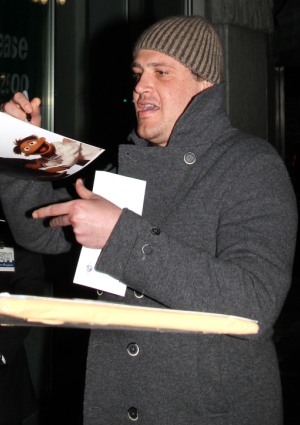 Jason Segel and Michelle Williams may be on the wings of love, but after she hears what he’s done in the back of a taxi cab she may think twice about locking lips. The actor revealed his food faux pas recently while out promoting his new film, The Five-Year Engagement.

Jason Segel, who plays groom-to-be Tom Solomon, was forced to trim down for his latest film role opposite actress Emily Blunt.

“They put me on a very strict diet and I had one very dark night,” the 32-year-old explained to Extra. “I take a taxi to this diner that closes at midnight and I get a burger and I’m like, ‘I’m gonna eat this burger.'”

Last minute drive-thru mission accomplished, Jason Segel set about devouring his forbidden food in the cab’s backseat. Recalling the story he continued, “And we’re driving in the taxi and we went over a speed bump and the burger fell onto the floor of the taxi and just disassembled.”

“I just put it back together, I picked off the hair… and then I just ate it.”

No word yet on if Michelle Williams is aware of her new beau’s burger low. The pair has chosen to stay mum about their relationship, aside from one brief comment. “I think we would just very much like to be happy,” Jason Segel said when asked about his new lady love. “That’s all I’m going to say about it.”

“Little” Jason Segel is coming out to play… again >>

An anonymous source commented to Us Weekly about the effect the romance has had on the actor, however, revealing, “Jason has been trying to be more of a grown-up lately. He is taking care of himself more, exercising, eating right and dressing better. Basically, not acting like a frat boy anymore.”

So we’ll just go ahead and call Jason Segel eating a burger off a taxi cab floor a momentary relapse?