Ted Nugent is in some trouble with the Secret Service after he made some out-of-line comments about President Obama. Does he care? We’re going to go ahead and assume that’s a big, fat “no.” 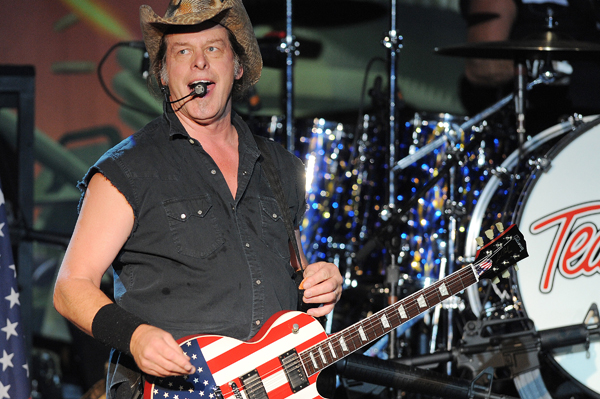 Anyone who has ever heard “Cat Scratch Fever” singer Ted Nugent talk knows that he doesn’t mince words. However, he might have taken it over the line last weekend when he made some comments about Barack Obama’s re-election at an NRA event.

“I’ll tell you this right now: If Barack Obama becomes the president in November again, I will either be dead or in jail by this time next year,” Nugent said. “We need to ride into that battlefield and chop their heads off in November. Any questions?”

Mitt Romney: Barack Obama is about as reliable as Kim Kardashian! >>

Some — including the Secret Service — are taking that as a direct threat toward President Obama. Oh, but he wasn’t done there.

“If the coyote’s in your living room, pissing on your couch, it’s not the coyote’s fault. It’s your fault for not shooting him,” he said, adding that this administration is full of “criminals” and a Democratic victory would mean “we’ll be a suburb of Indonesia next year,” a dig at one of the places Obama lived as a child.

Mitt Romney quickly distanced himself from Nugent’s comments, with one of his reps saying that “divisive language is offensive no matter what side of the political aisle it comes from. Mitt Romney believes everyone needs to be civil.”

The Secret Service are reportedly planning to interview The Nuge about his comments, though he told conservative talk show host Dana Loesch that he’s the victim here.

“I’m a black Jew at a Nazi-Klan rally,” Nugent told Loesch. “And there are some power-abusing, corrupt monsters in our federal government that despise me because I have the audacity to speak the truth. I have never in my life threatened anyone’s life. I’m incapable of threatening anyone’s life. Because I’m about positive change, my entire speech, all my articles.”

The 63-year-old singer then reiterated what he said earlier in the week.

“I spoke at the NRA and will stand by my speech. It’s 100 percent positive. It’s about we the people taking back our American dream from the corrupt monsters in the federal government under this administration, the communist czars he has appointed,” he said.

This is going to get hairy.

Do you agree with Ted Nugent’s comments? Remember to keep it civil, though.