The next big thing in fashion is Gisele Bündchen’s 5-year-old niece! Get ready to share the pint-sized style spotlight, Suri, there’s a new tot in town and her name is Duda. 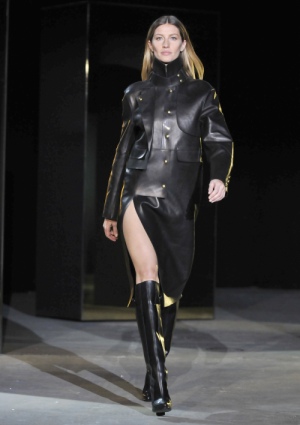 Gisele Bündchen’s niece has set out to prove good fashion can come in small packages. 5-year-old Duda Bündchen is about to launch a clothing line in partnership with the Brazilian kids-wear brand Brandili Mundi — a move we’ve been expecting Suri Cruise to make for years!

Duda Bündchen got her start by following in her aunt Gisele Bündchen‘s model footsteps. Last year the genetically blessed preschooler was chosen as Brandili Mundi’s spokesmodel. After a highly successful campaign the company not only extended Duda’s contract, but gave her a chance at the drawing board.

Her first solo collection, to be called Duda Bündchen for Brandili Mundi, is expected to hit stores in July.

Speaking of the role Gisele Bündchen’s niece had in the creative process Germano Costa, the brand’s commercial and marketing director, revealed, “She told us about her preferences on prints, cuts and details, and based on the briefing we received from her we came up with a collaborative collection. The pieces were all approved by Duda, whose romantic inspiration will no doubt catch girls’ eyes.”

Stateside, the most stylish celebrity offspring to watch for years has been Suri Cruise, daughter of Tom Cruise and Katie Holmes. The actress commented of her daughter previously, “Suri is magical when it comes to clothes — she’s quite an artist. My daughter has been choosing her own outfits since she was two. We go to fabric stores and sew together.”

“Sometimes I take inspiration from Suri‘s fashion choices,” Katie Holmes admitted. “Suri is my style critic. I know I look good when Suri asks if she can have my outfit when she’s older.”

It’s not as though Suri Cruise fashion offers haven’t been put on the table, however. Earlier this year it was rumored the 6-year-old (whose birthday is today, April 18!) was offered a “scary big” contract, which her parents ignored.

Are you surprised to see Gisele Bündchen’s niece launch a fashion line before Suri Cruise?