Angelina Jolie is being honored with a new role at the UN. What will this newly-engaged actress-director be up to? Read on to find out. 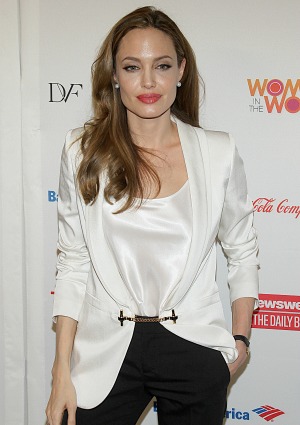 Angelina Jolie has more than one reason to celebrate today: Hot on the heels of the news of her engagement to Brad Pitt, the United Nations has announced that the actress will take on a new real-life role as special envoy.

Jolie, who has served as goodwill ambassador to the UN for ten years, received the promotion in a first from the international organization, who usually reserves the honor for career diplomats and retired politicians.

“Her work does go substantially beyond what we would typically see as being the normal role of a goodwill ambassador,” UN spokesman Adrian Edwards told reporters in Geneva. “I don’t think you need a rocket scientist to see the benefits that she is bringing in terms of the attention that she is getting for the plight of the world’s displaced.”

But while Jolie has donated tons of cash to the group over the years, that had nothing to do with gaining this new role.

“She has donated substantially to refugees,” Edwards explained, also noting that Jolie won’t receive any money for the job. “There is to my knowledge absolutely no connection between any donation of money and this role.”