Halle Berry is breaking her silence on her engagement to French hottie Olivier Martinez. What did she say? Sadly, not much at all. 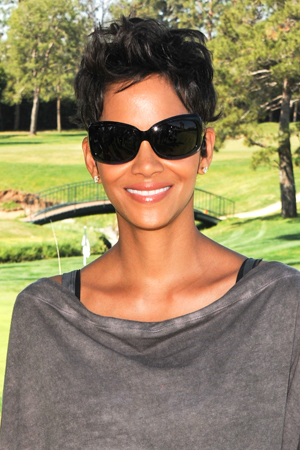 Apparently, you can’t believe anything Halle Berry says. The mother of Nahla, 4, told InStyle in 2007 that she was swearing off marriage after two failed marriages to David Justice and Eric Benét.

However, a sexy French man got her to change her mind: Olivier Martinez. The pair got engaged a couple of months ago — later confirmed by Martinez — but Berry hasn’t talked about it until now. “Who knew? I swore it off, right? Never say never, people!” she joked to Extra! last weekend at the Silver Rose Gala.

Berry didn’t say anything else about marriage or upcoming wedding plans, but we’re pretty sure we know at least one person who will be at the wedding: Nahla. The actress is a doting mother, telling the audience at the Silver Rose Gala that motherhood is her most important role.

“Being a mother is probably my greatest sense of purpose, but this gives me another sense of purpose outside my own family,” she said while honoring domestic abuse survivor Shinal Walker.

“She’s extremely beautiful. I call her my beauty. I think many people think domestic violence doesn’t affect beautiful people. But domestic violence transcends the physical selves. It’s something deep inside us that needs real healing.”

We’re just hoping Berry has finally found the family she’s been looking for with Martinez — especially since she’s still in a nasty custody fight with Nahla’s father, Gabriel Aubry. The actress recently changed lawyers to try and get full custody of their daughter.

“Neither Gabe nor his lawyer are scared or intimidated by [Berry’s lawyer]. Gabe thinks this will help his case, because he thinks it shows how desperate and impatient she is,” a source told RadarOnline. “He doesn’t believe either that Halle is afraid for her safety, when was the last time you saw her taking Nahla to school with a bodyguard? He believes it’s just another plot she is hatching to keep Gabriel out of Nahla’s life.”

Berry broke her silence on the custody battle last year — before things got bad — and said she wanted to bring things to an amicable conclusion.

“What I want to say about it is sometimes, as a couple, you reach an impasse,” she said. “We needed a court and a judge to help us work out some of the delicate issues, and I’m so happy we’ve arrived at that place — because for her sake, this is the best way.”