Debra Messing bares her body in Allure magazine’s new issue. Find out why she wasn’t scared to show off what her mama gave her.

Related story 33 Celebrities Who Have Posted Nude Photos (On Purpose) 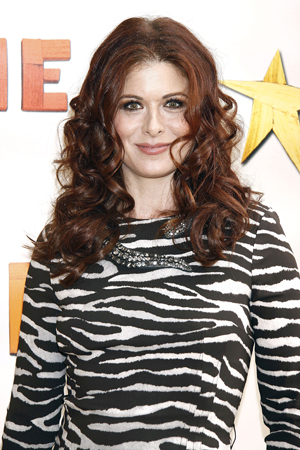 We’re seeing a new side of former Will & Grace star Debra Messing on her new show, Smash. However, Allure is showing us a totally different side of the veteran actress: In the nude! Messing, 43, poses, along with Heidi Klum and Maria Menounos, in the May issue of Allure magazine.

Calm down, boys — no boobs are showing. The spread features Messing on her stomach with her hands and camera angles covering the rest.

Why did she do this? Because she wanted to, that’s why.

“Once you have a child, once you pass 40, you have a different relationship with your body,” she told the magazine. “I love my body in a way I never have before.” Her favorite body parts include her “shoulders, clavicle, and chest,” Messing said.

“I started out in dance — there’s something beautiful about a dancer’s upper body. I love strapless dresses.”

Menounos isn’t as confident in posing nude, even with her hot body. Still, she told E! that she feels “accomplished” by posing in the buff.

“It took a lot of courage for me, who can barely take off her clothes in front of a doctor, to do this,” she said.

Messing and Menounos in the buff are just the latest in a rash of nude celebrity magazine covers. Lauren Conrad also went nude for Glamour’s May issue — and she said it was hard for her, too.

“On the vacation to Cabo, I wore a bathing suit on the beach for the first time in years. Usually I’m just petrified,” LC said of baring her body. “A couple of years ago someone zoomed in on my cellulite and it was so mean. I took it really personally. I haven’t worn a bathing suit in L.A. in years because of that.”