Sometimes the lust gods deploy a gift from above to satisfy hottie-appreciating women everywhere, and this year’s offering was giant posters and numerous TV commercials featuring footballer David Beckham wearing his skivvies to promote his line of underthings for H&M. Can we get an “amen?” So sculpted and so darn sexy, we sometimes think he can’t possibly exist among mere mortals. Becks is our modern-day Adonis clad in a sexy soccer uniform. 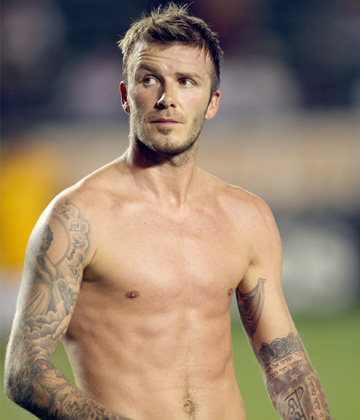 Sometimes the lust gods deploy a gift from above to satisfy hottie-appreciating women everywhere, and this year’s offering was giant posters and numerous TV commercials featuring footballer David Beckham wearing his skivvies to promote his line of underthings for H&M. Can we get an “amen?” So sculpted and so darn sexy, we sometimes think he can’t possibly exist among mere mortals. Becks is our modern-day Adonis clad in a sexy soccer uniform.

Whether he’s scoring a goal or showing off his underwear (wowza!), David Beckham is close to the perfect specimen of a man — and we can’t take our eyes off him. 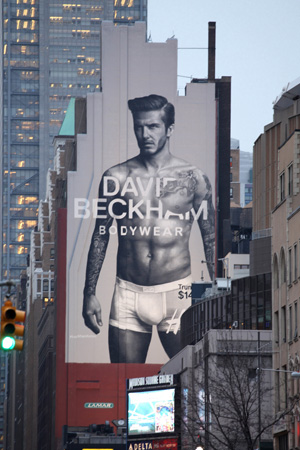 The man is a Greek god

Or… make that a British god. Even the higher-ups in Burger King’s marketing department took notice of David’s ethereal visage and gave him a starring role in a recent commercial (spoiler alert: Even the male fast food manager becomes enamored by him… and rightfully so!).

Thank football (or soccer, whichever side of the pond you’re from) for giving Becks that bangin’ bod: He was captain of the English national team from 2000 until 2006, and he’s also played for Real Madrid and, now, the L.A. Galaxy here in the States. In fact, his legs are insured for $70 million. And what nice legs they are!

Those great gams came in handy when David’s line of underthings for H&M hit stores in March and he served as a scantily clad one-man advertising campaign for the brand. Inquiring minds want to know: Does he prefer boxers or briefs?

“I wear the briefs when I’m playing because they’re more comfortable, but there’s occasions for each item,” he revealed to British GQ. “My favorite item? I think the big thing was the long johns because they’re kind of old school. Men used to wear them years ago and I wanted to try and bring that back. Before I had this idea, I used to wear long johns because I think they’re comfortable and I actually think they look good — and they keep you warm.”

Boxers, briefs, long johns… we’ll take him in all of the above! 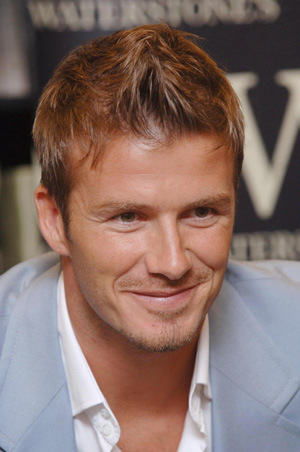 If you ever find yourself on a cozy at-home date with David Beckham (hey, a girl can dream!), your DVD library might seal the deal: “I confess — I love a good romantic comedy,” he told Women’s Health. And here we thought DB couldn’t get any better — he’ll also watch The Wedding Planner with us. Score!

His domestic hobbies don’t stop there. He also told WH that the most impressive dish he can cook is risotto. Fancy! We love it when our man fantasies and food fantasies combine.

He loves the U.S. — and his family 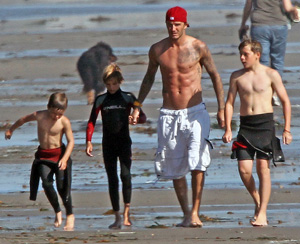 Now that he’s playing for the L.A. Galaxy, this hottie is living stateside for the foreseeable future. (He signed a new, two-year contract with the team in January.) Is he digging California life?

“[W]ho doesn’t like living in L.A.?” he told ESPN last year. “Everyone’s been great from the moment we arrived. Everyone’s been so friendly and accommodating. Everything we’ve done while living here has been a success. My sons are happy, my wife’s happy, so of course it’s a factor in where we want to live in the future.”

Thanks for this sexy export, Britain! 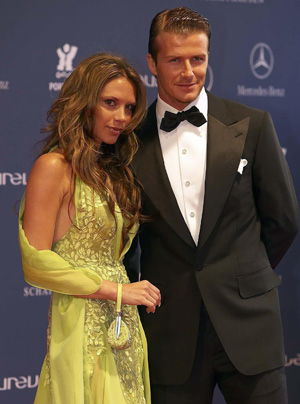 As if we needed another reason to envy Victoria Beckham (a.k.a. Posh Spice) aside from her lithe frame and fabulous wardrobe, Posh and Becks will celebrate their 13th wedding anniversary on July 4 (American Independence Day, it so happens). The pair have four children: Brooklyn, Romeo, Cruz and new addition Harper Seven.

When he finally retires from football (he hasn’t indicated the exact date), David says one thing he’s looking forward to is more time with his nearest and dearest: “It helps that my family has always been my number one priority anyway,” he told the Mirror. “I am sure my wife will be fed up with me being at home when I stop. But I am trying not to think about it yet.”

We’re pretty sure she won’t be upset that you’re hanging around the house, David! We know we wouldn’t be…