Sarah Silverman is proving that in the Twitter community humor is in the funny bone of the beholder. Some — but far from all — are laughing at the comedienne’s recent abortion joke. 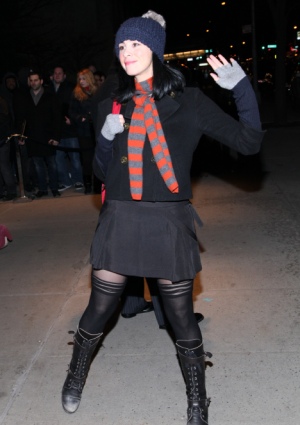 Sarah Silverman, known as a controversial comedienne, is delivering on her hard-earned reputation. The 41-year-old has Twitter users divided over a recent joke about abortion.

The Sarah Silverman abortion controversy started last Wednesday, when the funny lady tweeted a photo of her pushed-out stomach in a pregnant-looking pose. Though it may have at first seemed Silverman was making an announcement, the photo caption read, “It’s a burrito!”

Just about 12 hours later Sarah Silverman posted a second photo of herself in the same outfit and similar pose, though without her stomach pushed out in any way. This time the caption read, “Got a quickie aborsh in case R v W gets overturned.”

“Totally tasteless,” wrote one angry Twitter user in reaction. “If that’s what passes for humor these days, I guess you’ve got comedian of the year on lock down.”

A second disgusted Twitter user wrote, “@SarahKSilverman your latest joke was tasteless and insensitive. Abortion is not something you should be laughing about #shameonyou #sad.”

Yet others applauded the comedienne’s zinger and willingness to speak out on the possibility that the 1973  Roe vs. Wade decision, which ruled in favor of a woman’s right to have an abortion in the early stages of pregnancy, may be overturned in the U.S.

One supporter even appeared to have found a renewed interest in Sarah Silverman’s brand of comedy, writing Tuesday, “I have a sudden urge to watch all Sarah Silverman Program seasons over again.”

For her part, Sarah Silverman appears to have quickly moved past the controversy and on to other musings. She tweeted Saturday, “This is true & not a euphemism: My dog cries when I have sex.”

What is your reaction to Sarah Silverman’s abortion joke?