Donald Trump is on the Rosie O’Donnell haterade train again. Read on to find out what he has to say about the TV personality and her recently canceled talk show. 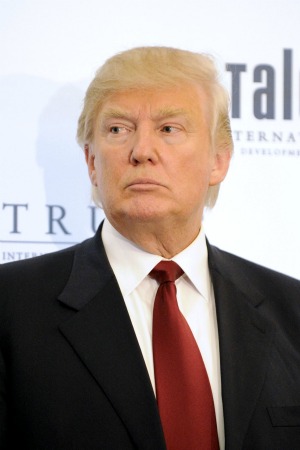 Donald Trump is reigniting his feud with his archenemy Rosie O’Donnell. The host of Celebrity Apprentice says that Oprah’s biggest failure is a bully and he is in no way, shape or form surprised that her show totally bombed.

“Bullies are people that you have to meet head on and I met her head on. A lot of people didn’t but she didn’t get away with the act.”

“I predicted correctly that Rosie would never make it,” he said. “I did say that and she never made it so that was sort of good and I was very proud of that frankly.”

Actually, that directly contradicts what he told Access Hollywood in October, after the dismal debut of O’Donnell’s show on OWN.

“I felt badly that her ratings were so bad,” Trump said back then. “Actually, I would like to see her be successful because everything Oprah does, ultimately, is successful, so I think Rosie will be successful.”

But by the time The Rosie Show was canceled last month, he had changed his tune.

“Well, I always knew that Oprah was smart,” Trump told Fox News morning host Steve Doocy. “Frankly, that was just going to happen. I knew it immediately as soon as they announced it. Rosie fails at everything. She had a variety show that failed… Somebody else, some moron, will come and hire her again to do something else, and that will fail. At some point, let her rest. Let her go away.”

Then Trump dug in on Twitter, writing, “Rosie O’Donnell has failed again. Her ratings were abysmal and Oprah cancelled her on Friday night.”

“When will media executives learn that Rosie just hasn’t got it.”

These two really need to make out and get it over with.