Looking for your daily dose of tweets from Nicki Minaj? You’re out of luck — the Roman Reloaded rapper deleted her account this weekend after a tiff with some haters. 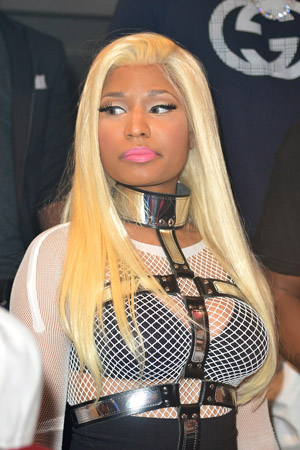 Sunday is a day that will live in infamy for the self-proclaimed Barbz — or fans of the “Pink Barbie” Nicki Minaj: She deleted her Twitter account!

Say what? It all started when a Minaj fan site, NickiDaily.com, leaked some unreleased tracks from her album Pink Friday: Roman Reloaded. She was a little upset, to put it mildly.

“And that’s exactly why I’m paying the barbz DUST right now! And deleting my twitter,” she wrote. “Smdh – don’t cry 4 me Argentina.

Others weren’t so upset.

“So Tupac did a hologram performance & Nicki Minaj deleted her twitter,” another user tweeted. “We are moving in the right direction for the rebirth of Hip Hop.”

Minaj has also faced increasing criticism over the past couple of weeks for comments she made about her father, saying she “wanted to kill” him for being abusive when she was a child.

“My father was abusive. We were afraid for [my mother’s] life because whenever he would have a real bad outburst, he would threaten to kill her,” she told ABC’s Nightline last week. “I wanted to kill him. I wished he was dead.”

However, she claims that she doesn’t care what people think about her, even if deleting her Twitter shows something different.

“When a man is ‘bossed up,’ he is taking control, he’s getting money, he’s in control of his settings every time and there’s no synonym for it in the female world outside of bitch,” she said of being a strong woman in hip-hop.

Will she be back to Twitter? Probably. Other celebrities like Alec Baldwin and James Franco took a break from Twitter before coming back. It’s all likely a scheme to increase interest in her new album — and show who’s in charge.