Emma Watson just turned 22! How did she celebrate? With some music and PDA courtesy of her new boyfriend, Will Adamowicz. 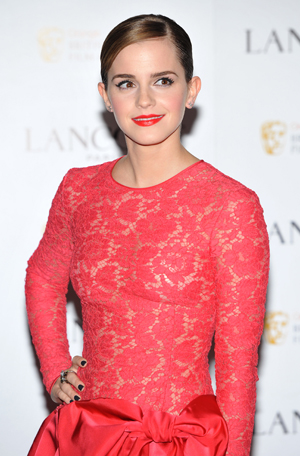 Newsflash, Harry Potter fans: Emma Watson is no longer the sweet-and-innocent Hermione Granger. The actress, who just turned 22 on Sunday, celebrated her birthday by smooching up a storm with her new boyfriend at Coachella.

“Just enjoyed a birthday feast of mac n’ cheese, jelly beans and lemonade,” the actress tweeted on Sunday, later adding a tweet about her favorite performer at the festival. “As far as I’m concerned I turned 22 when Florence + the Machine sang ‘What the Water Gave Me’ at Coachella.”

The actress officially “debuted” her relationship with beau Will Adamowicz at the festival. The cute duo kissed up a storm while watching the performances. Adamowicz is a Boston native, according to US Weekly, and met the superstar actress at Oxford University. The actress is currently studying there, too.

However, she’s got more on her plate than studying and boyfriends. The actress is currently filming Bling Ring, a film based on the rich Hollywood teens who robbed homes of celebrities like Paris Hilton, Lindsay Lohan, Audrina Patridge, Orlando Bloom and Rachel Bilson back in 2008 and 2009. Several of the bandits were later caught and sent to prison for their crimes.

“Filming Bling Ring is going great,” Watson tweeted recently. The best thing about her role in the film? She has to rock a giant “tramp stamp” tattoo on her lower back. Not exactly something we’d expect to see on the pretty British actress.

We’re really happy that Watson has a new dude in her life — especially since she’s had such a tough go at it with relationships.

“I’m a terrible game player. I’m so impatient — it’s one of my worst traits! If I want to see someone, I want to see them, and if I don’t, then I don’t,” Watson told Seventeen magazine last year.

“My friends are always telling me I have to play hard to get because I’ll pretty much say to a guy, ‘I like you — let’s go hang out.’ But my friends are like, ‘You can’t do that! You have to string this guy along.’ And I’m just like, ‘No! I won’t! I just want to go on the date! It’s a nightmare — I definitely haven’t figured it out yet.”