Is Kate Middleton’s little sister headed to the clink? It’s possible after a weekend incident involving a convertible, a gun and a photographer. 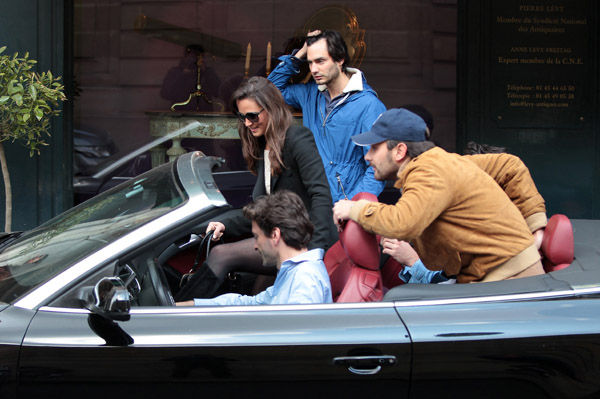 It was almost a year ago when we were first introduced to Pippa Middleton and her ahem, assets, at the royal wedding. What a difference a year makes. As for now? The best-butted little sister of Kate Middleton is in some trouble for flashing a gun at photographers in Paris.

Well, she didn’t have the gun — one of her friends pointed the pistol (or a realistic-looking fake) at the paps from the front seat of an Audi convertible.

The image — first published in the U.K. gossip newspaper The Sun — shows a laughing Pippa as the gun was pointed directly at the camera lens.

Pippa Middleton skis her famous butt off in Sweden >>

“The driver took out the weapon and brandished it in broad daylight,” the gossip rag wrote. “He waved it in the air and pointed it at a photographer — whose snaps show the chilling moment the barrel of what looks like a semi-automatic stared straight down his lens.”

We’ll admit it: We’d probably wet ourselves if a gun were pointed in our general direction. However, they might be overreacting just a tad.

But French officials aren’t joking about the situation.

“If the evidence points to her involvement, she will be prosecuted. Anybody involved in the illegal use of a handgun in public is liable to arrest and interrogation,” a law enforcement official told The Sun, adding that “all parties involved” could get up to seven years in prison if the gun is deemed real.

Pippa and her male buddies can get up to two years even if it’s a fake gun.

“Certainly if you were in a car and knew somebody was using a gun to warn people off you’d be liable to arrest,” the source said.

Yikes. The photographer is reportedly “considering his options,” meaning he’s probably going to make a big deal out of it for publicity.

Regardless, illegally brandishing a gun in public — even as a joke — is really, really stupid.

Should Pippa Middleton and pals get in trouble for their gun prank?