Is Ashton Kutcher out there to break the heart of every Hollywood hottie? It seems like it. The latest “victim?” He’s reportedly dating Mila Kunis. 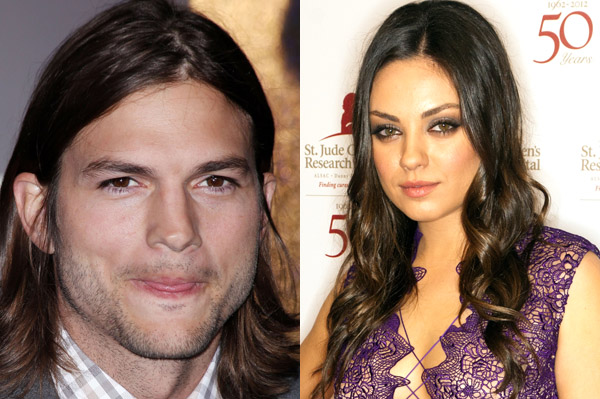 Didn’t Mila Kunis learn anything from playing Ashton Kutcher’s girlfriend for seven years on That ’70s Show? Apparently not — the two were spotted on what is described as a “full-on date” over the weekend.

“Ashton was touching Mila’s hand and Mila was all dressed up,” a photographer trailing the couple told X17online.com. The pair was spotted together — Kunis in skinny jeans and Kutcher in a ball cap — leaving the Los Angeles Japanese restaurant Asanebo.

Judge for yourself: They don’t exactly look like they’re super in love — but anything is possible, right? He’s been spotted with a bevy of beautiful ladies since his split with ex-wife Demi Moore late last year. First, he was rumored to be dating his New Year’s Eve co-star, Lea Michele. Then it was Lorene Scafaria. Then Rihanna. Who could forget RiRi’s freakout when a reporter asked about it.

“You’re so good with connecting with people, that I think that we actually feel we know you. Things are clearly going brilliantly in your career. I just wondered if you are as happy in your private life. Will we be seeing a certain Mr. Kutcher perhaps making a trip over here?” the reporter asked.

“Wow, how disappointing was that question,” Rihanna answered. “I’m happy and I’m single, if that’s what you’re really asking.”

Another reporter asked about Kutcher just a few days ago — and Rihanna reacted pretty much the same way.

“How frustrating is it when you’re linked with another big star, even if you’ve barely met them?” the reporter asked.

“Very frustrating, almost as frustrating as being asked about it… what’s the point?” she spat. Maybe that’s what Kutcher likes, though. Good news for Kunis, especially after her Russian freakout about Justin Timberlake last year.

“What kind of question is that? Why are you here?” she asked the insulting reporter. Me-ow! We love it.

As for Kutcher and Kunis together? We don’t love it. Run away, Mila — run far, far away.

The Buzz – Ashton Dating Mila Kunis?
Ashton Kutcher and Mila Kunis may be dating. Both were found having dinner together on April 15th.