Howard Stern is fired up over Kim Kardashian’s request for privacy when it comes to her alleged lover Kanye West. The shock-jock predicts reality viewers are in for an eyeful as soon as the ratings dip! 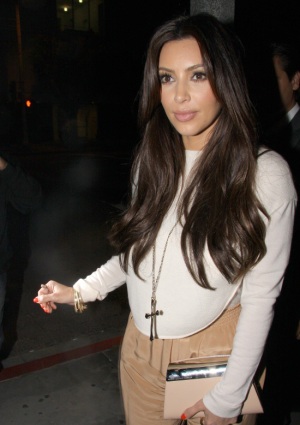 Howard Stern is crying foul on Kim Kardashian‘s plea for privacy regarding Kanye West. The radio host says Kim and the clan can’t be open kimono one moment and closed door the next.

“This is the girl who got famous revealing everything about her personal life,” Howard Stern ranted to the New York Daily News about Kim Kardashian. “Now… she thinks she’s Jennifer Aniston.”

Mocking Kim’s recent interview, in which she asked for privacy regarding her alleged romance with Kanye West, Stern parroted, “‘I don’t want to talk about Kanye, I don’t want to speak about it, I don’t read the tabloids, everyone back off.'”

“I completely respect and understand that you have to ask these questions, but as I’ve said before, Kanye and I have been friends for years,” Kim told Ann, refusing to divulge any further details. “You know, you never know what the future holds or where my life will take me.”

Khloe and Kim Kardashian get a case of road rage >>

Howard Stern wasn’t quite finished with the mocking, however. Not believing Kim’s claims that she’s now a “private person” the new America’s Got Talent judge predicted, “The second her show gets a dip in the ratings… she’ll have Kanye in his underwear, dancing on her show. I mean, come on already, stop the nonsense.”

Do you predict Kim Kardashian will take her Kanye West romance public for the sake of ratings?