Kelsey Grammer’s hips don’t lie. He’s madly in love with a woman named Kayte, and just crazy enough to have her name tattooed on his hip. 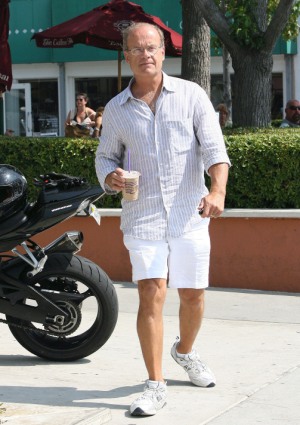 You can’t have sexy time with Kelsey Grammer without being reminded of Kayte Walsh. The 57-year-old actor has made a permanent gesture of love to his fourth wife, having her name tattooed on his hip over the weekend.

Kelsey Grammer and Kayte Walsh hit up the tattoo parlor Friday, looked over a few design options, then decided putting her name on his right hip was the way to go.

“He was pretty cool about it,” said Bob Jones, owner of Insight Studios, about Kelsey Grammer. “He said it was his first tattoo and he did some research and said, ‘You guys seemed to be the best place to go.'”

Adding a little color commentary to the Kelsey Grammer tattoo recap is 72-year-old Christine Darbo, the grandmother of tattoo artist James Eastwood who did the ink honors.

“They were just normal people. We were talking about tattoos,” Darbo told the Chicago Sun Times. “He said, ‘I’m going to get Kayte’s name.’ My friend asked, ‘So how long have you been dating that he wanted to tattoo your name?’ She said, ‘We are married.’ I figured with his background he should just put a ‘K’ with a period to give him some flexibility.”

“She was pretty, but not gorgeous…They were fun,” Darbo went on to say of Kelsey Grammer and Kayte Walsh. “Very friendly and into each other. They were just talking and enjoying each other.”

Kelsey Grammer on the “magical” night he cheated >>

When the blue ink, half-inch letters were done, Kelsey Grammer paid his $60 tattoo bill and hit the road. “He’s the only famous person I’ve ever tattooed,” Eastwood commented. “He’s a pretty down-to-earth dude.”

Does Kelsey Grammer’s hip tattoo do anything for you?