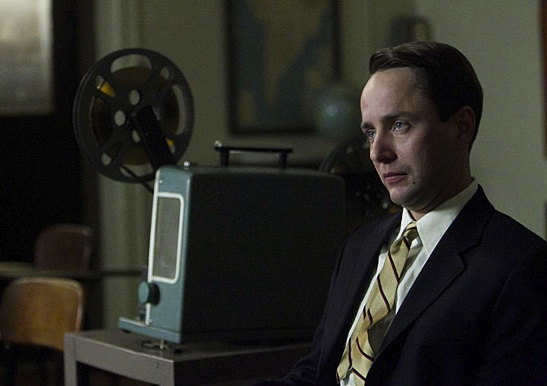 Throughout Mad Men‘s run, Pete Campbell has cultivated a long and storied history as the office suck-up, the selfish fool, the abrasive flirt and the guy who got Peggy pregnant. Throughout it all, it’s been easy to admire Vincent Kartheiser’s under-celebrated performance, even as it’s often been difficult to admire (or like) the character he plays.

Season five, however, seems poised to show us a different side of Pete — one of competence, stability and success. As Roger flailed and faded with the ad men of yesteryear, and as Don became comfortably immersed in his second marriage, it was Pete who seemed to bring added value to the firm and a sense of security for its future. It was Pete who seemed, finally, to “have it all.”

But if Mad Men has taught us anything, it’s that appearances nearly always deceive.

The title of last night’s episode, “Signal 30,” is also the police radio code for death. This is notable because death and decay have (figuratively) played central roles throughout the season, so far. True to that theme, last night’s episode drew from a fairly morose vein: Don doodled a noose during a meeting, Pete’s young female friend shared her parents’ concern about a university sniper, Don said the very idea of a Saturday night dinner party made him “want to blow [his] brains out,” and on and on. Which made me wonder: Could this series actually be leading one of its characters toward suicide?

If so, Pete — the man who seems finally to have his life together — might just be the likeliest candidate for an early termination. Last night’s installment of Mad Men reinforced that despite (or, perhaps, because of) his beautiful country home, his loving wife and his infant child, Pete Campbell is deeply miserable and easily emasculated. “Signal 30” found plenty of ways to demonstrate that suffocating reality.

The episode opened with Pete attending a drivers’ education course and finding himself amused by its grisly videos of dead motorists. While in class, he met and flirted with a high school student, and their ongoing dialogue seemed to get Pete feeling young and adventurous and even attractive for, possibly, the first time in quite a while. Near the end of the episode, however, Pete’s schoolgirl crush redirected her interest toward someone her own age. Sure, it’s an unavoidable truth that Pete Campbell is never quite as charming as he wants others to believe, and he’s not exactly the most likable person, but you couldn’t help but feel a little something for the guy. Where other characters on Mad Men make a good show of keeping their heads high and their gaits easy, Pete still stumbles far more often than he strides.

But you can’t say he doesn’t put in the effort. In “Signal 30”, Pete and Trudy — very eager to impress Don with the financial success and domestic contentment that seem to signal achievement in their circles — hosted a dinner party that Don only attended at Megan’s urging. What was meant to be an opportunity for Pete to show off, however, quickly went sour when Don expertly fixed a broken faucet in the Campbell kitchen. Don’s gift for plumbing repair got Megan a little aroused — but Pete, true to form, was left on the sidelines, impotently holding his own tool.

(To add insult to injury, Trudy wouldn’t even allow Pete to crank up his new stereo, put cookies in the icebox, or keep his gun in the house.)

Pete had a rough week at work, too. After launching some wounding criticism towards Lane in the wake of a botched client relationship, he suddenly found himself in a rare bout of fisticuffs in the conference room. Lane got the best of Pete, of course, but Mr. Campbell seemed even more wounded by the fact that Don didn’t step in to aid in the fight. “We’re supposed to be friends,” a very battered Pete told Don after the brawl had ended. Apparently Pete hasn’t been watching this show.

Hopefully Mrs. Campbell hasn’t been watching, either, because Pete strayed from his picture-perfect marriage again last night, finding comfort in a prostitute who called him her “king.” Not a huge surprise, that ego jolt was just the sort of thing Pete needed to hear after so many successive humiliations. More alarming, though, was the fact that Don (the guy who has had countless affairs since this series began), made no secret of his disapproval of Pete’s infidelity. If Don had found Megan before he had met Betty, Don said, he would not have fooled around.

The hour wasn’t entirely about Pete, however. The opportunity to help Lane with a client meeting breathed new life into Roger, who seemed giddy with the opportunity to dispense some solid advice after so many weeks of feeling useless. His efforts were all for naught, however, as the client’s wife was distressed by the risqué “party” to which he was treated — but it sure was nice to see Roger Sterling happy for once.

And Ken, Pete’s much more self-assured contemporary, revealed to Peggy that he has lately found success by publishing short fiction under a pseudonym. The discovery of Ken’s secret life didn’t sit well with Roger or Don, however, and Ken got a bit of a dressing-down in Roger’s office. But that didn’t stop Mr. Cosgrove from writing. After switching to a new pseudonym, he was back to dreaming up new stories. If only Pete were able to handle life’s setbacks so well.