The Hunger Games blew away the competition at the box office for a fourth straight weekend, but some dim-witted jokesters managed to pull in more cash than anyone thought possible on its opening weekend. 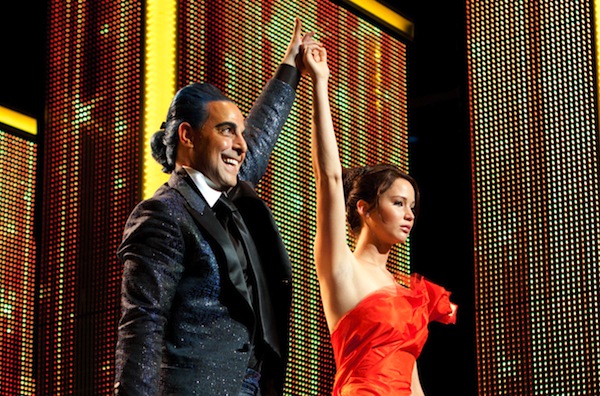 Katniss Everdeen is still slaying the competition — though this time it’s at the box office, rather than in the Arena. The Hunger Games just finished its fourth week at the top of the box office, raking in $21.5 million from Friday to Sunday, bringing its domestic total to $337.1 million after 24 days in theaters.

That’s not all: It’s also earned a healthy sum overseas, bringing the worldwide pull on this $90-million-dollar adaptation of Suzanne Collins’ book to $531 million.

Joss Whedon‘s highly secretive horror-com The Cabin in the Woods came in at number three, bringing in $14.9 million. The total was a surprise to many critics, especially since Lionsgate didn’t do much to promote the film. However, it sounds like it’s pretty good — rapper and actor Ice T gives it two thumbs up.

“Cabin in The Woods Super dope! I can’t even explain it without giving the twists away.. Very #APPROVED,” he tweeted on Sunday.

Movie review: The Cabin in the Woods >>

Titanic 3D and American Reunion rounded out the top five with $11.6 million and $10.7 million in ticket sales, respectively.

One of the biggest disappointments of the weekend was the Guy Pearce/Maggie Grace thriller Lockout. The film topped out in ninth place over the weekend, bringing in a paltry $6.3 million from 2,308 theaters. Too bad, especially since Pearce managed to get injured almost every day while filming the movie.

“I hurt myself almost every week… I pulled a muscle in my leg,” he told SheKnows in early April. “I had a hot bullet casing ricochet off the ceiling and go straight down the back of my shirt and burned my back.”

What movies did you see this weekend?