Zac Efron is back on the big screen — this time without any kind of musical number or supernatural element. Oh, and without a shirt on. How did he transform? 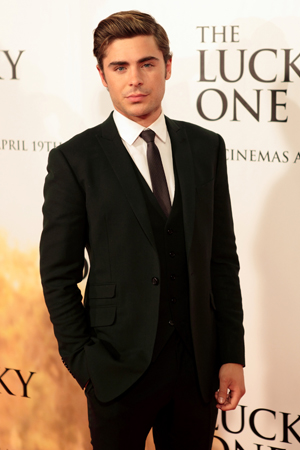 Zac Efron plays a U.S. Marine returning home from Iraq in The Lucky One, the new film co-starring Taylor Schilling and penned by the novelist that tugs at all our heartstrings, Nicholas Sparks. But all those hot makeout scene that show off Efron’s body required a ton of work on the actor’s part — after all, he’s supposed to be a man just coming from war.

“I didn’t feel like I was the type of guy to actually portray them accurately,” Efron says in the latest issue of Men’s Health. The actor accompanied director Scott Hicks to Marine Corps Base Camp Pendleton in Southern California, where Efron met with Marines and researched the role straight from the real thing.

It was then that the seriousness of his new role struck a chord. “It’s much different from the lifestyle I’m living over here,” he says. “Where do you start the conversation? I didn’t know what to say, what questions were inaccurate.”

To get into believable Marine shape, he loaded up on protein, gained weight and trained with a former Navy SEAL. “By the end of the movie I didn’t recognize myself. You hear about guys like Christian Bale who dive into it and are really able to transform. I’ve always wondered if I had the willpower to actually do it. And I’ll always have pride around the sense that I can.” We’re loving the new and improved look, Zac!

The Lucky One hits theaters nationwide on April 20! Watch the steamy trailer below:

Movie review: The Lorax
Zac Efron: Yep, it was a condom
Zac Efron and Taylor Swift clarify relationship in song