Pauly D is an expensive reality TV personality. So the talent agency who renegotiated his price tag is suing for their cut of his paycheck. That’s some commission! 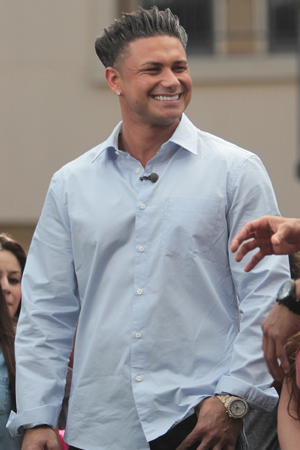 Gym, tan… lawsuit? Yet another castmate of MTV’s Jersey Shore is being sued — this time for refusing to pay a hefty commission to the talent agency that negotiated his paycheck with the network. Looks like having fun every summer makes some serious cash.

Here’s the deal, according to The Hollywood Reporter — Pauly D was first signed by MTV in 2009 to head to the Jersey Shore for the summer. After such a successful first season, talent agency ICM renegotiated his contract with the network after each subsequent season. However, ICM only received a cut from his paychecks for some of the past seasons, and though the agency has been fired by the DJ, there’s apparently $370,000 of unpaid commission worth fighting for — and possibly more, since he’s set for Season 6.

ICM filed the lawsuit yesterday with the Los Angeles Superior Court. According to the complaint, “No deed goes unpunished, however, and DelVecchio ultimately terminated the representation.”

So how much is the DJ paid to party on the Jersey Shore? For Season 5, he raked in $150,000 per episode! Along with money due from after-shows, reunion shows, merchandising, a very generous signing bonus and more, Pauly D is said to be entitled to $2.1 million.

Though Pauly D already fired ICM, the agency cites that the “standard custom and practice in the entertainment industry [is] that talent agencies are entitled to post-termination commissions on all deals they negotiate for their client.”

However, Pauly D’s lawyer thinks otherwise. “ICM was paid for its services,” said attorney Hillary Hughes to THR. “It is even more disappointing that an agency like ICM would choose to take advantage of its former relationship with a client and disclose his confidential business affairs to the public, in disregard of any duties it owes as a talent agency.”

Freedom! The Situation is out of rehab
Snooki gets fierce over baby amid cheating claims
Um, what? Snooki walks baby doll in stroller