Can’t wait to see who Tim Tebow will date next? You’re not alone. The quarterback speaks about being the subject of so much juicy gossip. 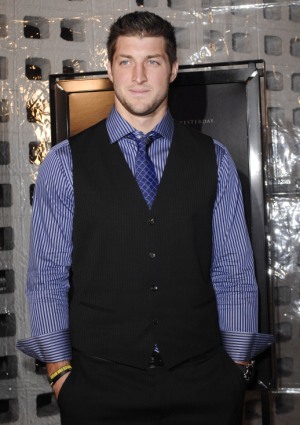 Tim Tebow knows you’re talking about him, spreading gossip about the famous faces he is supposedly hooking up with. Turns out all the rumors you’ve heard (including the one about a love triangle with Taylor Swift and Dianna Agron) he’s heard too!

The 24-year-old quarterback commented, “It’s funny, because half the rumors, I’ve never even met the people.”

“I’m sure they would be lovely,” he added with a laugh.

“I had a lovely 10-minute chat with him,” Dianna Agron said of their single, chaste encounter. “I’ve got a boyfriend… I haven’t seen him [Tebow] since.”

Tebowing for love? Tim Tebow wanted for The Bachelor >>

Not one to give up hope easily, Jimmy Kimmel then inquired about Agron’s relationship with the other member of the supposed love triangle, Taylor Swift. “Are you dating her?” he asked. “That would be great.”

“Wouldn’t that be juicy?” the actress replied before turning to the camera, blowing a kiss and purring, “Hi, Taylor.”

Not missing a beat, Jimmy Kimmel chimed in with his message of approval, saying, “I’d like you to be more than friends!”

Something tells us this hookup suggestion may be a little too hot for Tim Tebow’s conservative sensibilities!

Do you believe the gossip that Tim Tebow is playing the Hollywood field is true?