The new trailer for Looper, the time travel movie in which Joseph Gordon-Levitt is sent into the future to kill himself, aka Bruce Willis, has minds spinning everywhere. 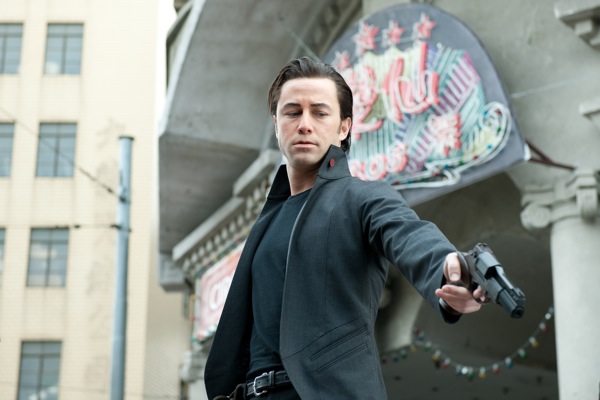 Now just why would you want to kill yourself? Seems like that would be the last person on planet earth you’d want to harm. Well, not for Joseph Gordon-Levitt in the new thriller Looper. He gets himself into quite the pickle when assigned the task of traveling through time to kill his future self.

And when your future self is played by Bruce Willis, the chances of success become that much more slim. Just how is this 50-50 star going to pull it off? The hot new trailer for the sci-fi thriller gives a few hints, but not many.

Set in the sparse landscape of what looks to be the dusty Midwest, the story is told in voice-over with Gordon-Levitt just as nervous as any of us might be if we were asked to do the unthinkable. “Time travel has not yet been invented, but 30 years from now, it will have been,” his character says. Apparently, he’s one of many “specialized assassins” in the present day who are called “Loopers.” They travel through time to get rid of those who make this dangerous list.

The trailer has a slow-moving rock star feel, with Gordon-Levitt strolling through the streets with great conviction. Loopers are well paid, he tells you, they live the good life. But there’s only one rule, “Never let your target escape.” Even if it’s you.

The viewer starts to wonder if we should be rooting for Gordon-Levitt or Bruce Willis?

The film co-stars Emily Blunt (The Adjustment Bureau, The Devil Wears Prada), Jeff Daniels (The Squid and the Whale, Dumb and Dumber) and Paul Dano (There Will Be Blood, Little Miss Sunshine).

Looper comes out in theaters Sept. 28.