Celebrities aren’t immune to road rage, apparently. Kim Kardashian and her sister, Khloe, confronted a woman that followed them as they left a shopping center. Find out what they did to retaliate. 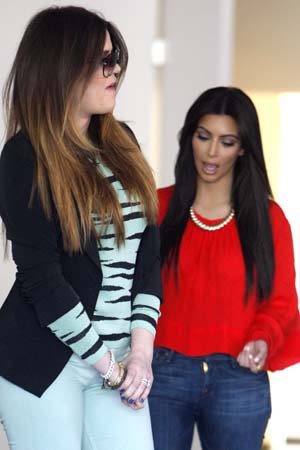 Kim and Khloe Kardashian were none-too-pleased on Wednesday when a woman tried to run them off the road on a busy Los Angeles street. Photographers were there to capture the sisters as they confronted the driver — and her male companion on the street.

“This driver tried to hit us and run while video taping it. She works for CBS Sports. Wow drivers beware,” Kim tweeted afterward. She believed the pair worked for the network because of a t-shirt the passenger was reportedly wearing.

However, a rep for CBS told TMZ that’s not the case. “There is nothing that makes us believe this person works for CBS Sports.”

It’s all part of a day in the life of the world’s most famous reality family. Honestly, we’re not surprised at the incident. However, video taken at the scene shows just how many E! cameras and paparazzi follow them at all times. How do they get anything done? We’ll take being normal and non-famous over that craziness any day.

It looks like the media scrutiny is only going to increase, though — Khloe fanned the flames of the rumored relationship between her older sister and Kanye West, telling Ellen DeGeneres that they’re compatible together.

Apparently West is planning to whisk Kim away on some lavish vacation because they’re totally in love and soulmates.

“It’s not a PR stunt,” an insider told US Weekly. “They’re perfect for each other. He thinks she’s his Beyonce!”