Anna Chlumsky has gone from plucky child star to super-sexy woman. Find out what she’s up to these days. 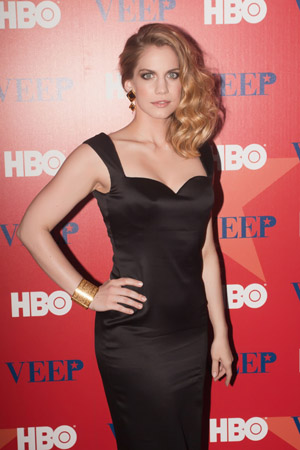 We remember watching My Girl so many times that we wore out our VHS copy. The film — co-starring Dan Aykroyd and Macaulay Culkin — was just the sort of coming-of-age tale that we could relate to, thanks to star Anna Chlumsky. Sadly, the once-promising child actress faded away from acting as she got older.

Well, until now. The 31-year-old actress walked the red carpet on Wednesday night at the premiere for Veep — her new HBO series that co-stars Julia Louis-Dreyfus — and whoa, she’s all grown up now.

So, where has Chlumsky been all these years? Well, she took a job at the book publisher HarperCollins after college.

“When I graduated from college I thought I was over with show business and was pursuing other things… I thought when I got the really great nine-to-five [job], when it’s the best in their world, then I’ll be happy,” she recently told Slate.

The acting bug eventually bit her again — thanks in part to a psychic.

“There were a lot of signs leading up to my getting back into [the] business. I was crying on my lunch break, and a psychic was handing out her pamphlets, and she said, ‘Excuse me I have a question.’ And I was like, ‘Yeah, yeah, get away from me.’ But she followed me and poked me on the shoulder and said, ‘Are you the girl from My Girl?'”

And the rest, of course, is history.