Has Jenny McCarthy found love? Well, she’s at least finding a companion in NFL linebacker Brian Urlacher. Find out where the two were spotted on Wednesday night. 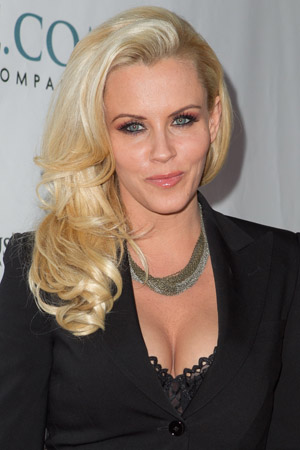 It looks like Jenny McCarthy found the “bald, big-nosed man” she dreamed about in 2011: The former Playboy Playmate enjoyed a dinner date on Wednesday night with Chicago Bears linebacker (and bald man) Brian Urlacher.

The pair was caught trying to make an exit out the back of the Hollywood eatery Mastro’s on Wednesday night, but TMZ cameras quickly caught up with them. The pair left together in a black SUV.

McCarthy, 39, has had quite the time with love: She was married to John Asher and they had a son together, Evan. She later dated actor Jim Carrey for several years before splitting in 2010. She casually dated other men, but they didn’t quite measure up to her expectations.

“Out here, they want to borrow my makeup and concealer,” she said in November of the male population in Los Angeles. “I want to bring a little bit of importing into my life and look for guys outside of L.A.”

It sounds like Urlacher fits that bill pretty well — and he also has something else she was looking for: A J-O-B. “They have to have a job. I’d like them to at least be able to buy dinners and stuff like that. That is important.”

Match made in heaven then, right? Well, maybe — he’ll have to compete with the multitude of creative projects she’s working on, including a VH1 show and NBC’s Love in the Wild.

“It’s a huge advantage to have the versatile Jenny McCarthy return to host an alternative series on our network in a genre that she first helped to make popular on television,” said Paul Telegdy, NBC’s president of alternative and late night programming.

“She brings a measure of unpredictability to the show’s unique format and we are thrilled to feature her charisma, enthusiasm and magnetism in this adventure series.”