Blythe Danner plays the guiding light that brings star-crossed lovers Zac Efron and Taylor Schilling together in The Lucky One.

Although actress Blythe Danner plays a sweet, hopeless romantic in the new Nicholas Sparks film The Lucky One, she is anything but mushy. The tough 69-year-old mom of actress Gwyneth Paltrow is decidedly cynical, outspoken and tired of Hollywood’s crap.

In The Lucky One, Danner plays a wise Southern woman who encourages her granddaughter, played by Taylor Schilling, to fall in love with a drifter. And that drifter just happens to be Zac Efron. I hope my granny would be on board, too, Blythe!

“I loved the fact that this wasn’t a script that was filled with a lot of junk,” Danner says of the project. “There’s such bad stuff out there… And, the society is in enough trouble.”

Some of Danner’s favorite films are smart comedies like Bridesmaids. Although this film is quite the opposite. The Lucky One is a sweeping romance with lots of cute falling-in-love moments (think running with dogs, paddling in lakes and laughing while walking through fields). Thank you, Nicholas Sparks, we’ll eat it up with a spoon! 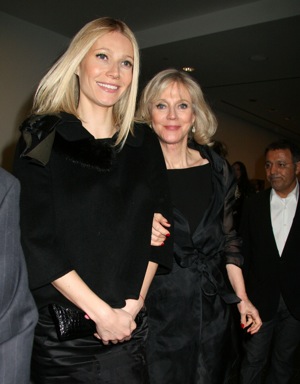 So, would Danner arrange for a quiet night at home to view this type of movie with friends or her famous daughter, Gwyneth Paltrow?

Celeb mothers and daughters: Blythe and Gwyneth are tight >>

The answer is no, she laughs.  “Part of me is kind of cynical, but I’m glad that I had a chance to do this because it took me away from that way of thinking. I really did escape into this lovely world,” Danner says.

It’s not hard to fall for the gorgeous blue-eyed soldier who winds up on your doorstep after finding a photo of you while on a tour of duty overseas. Efron plays that soldier. He has no home, no friends and no money, only the hope that the woman whose photo he found after surviving a raid during combat is the secret to his salvation.

When asked if she believes in this kind of destiny when it comes to love, her answer is, “No, I don’t.” She laughs. “But I do believe in love. If you get lucky, great.”

The Lucky One releases in theaters April 20.

Watch The Lucky One trailer