The blue-eyed beauty plays a conflicted soldier who goes on a mission to track down the woman whose photo he finds after a night of combat in the The Lucky One. 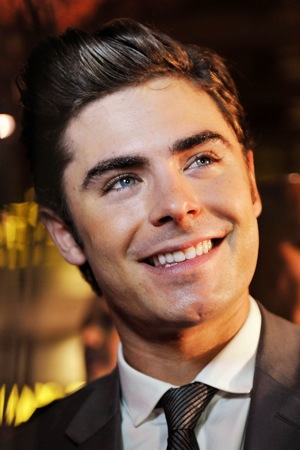 “Yeah, I do,” says Efron, a little shy on revealing his true feelings about the subject at hand. He was even more reserved when we got to the questions about the love scene. Come on, ladies. It’s Nicholas Sparks. There is, of course, a steamy sex scene, in the water, on a hot summer day. You love it. So do we!

“I do a little pre-warm up and stretching,” Efron jokes. Schilling laughs. He is adorable; she knows it. But Efron quickly tries to debunk any rumors that filming a sex scene is anything more than a day at the office. “Those scenes are sort of build up,” he says.

“We were very comfortable,” Schilling pipes up. “We had done so many scenes together at that point,” Efron says, “that we had a great rapport.”

You mean on-screen chemistry, right? The sex scene between Schilling and Efron is the whole reason to see this movie. We won’t give away any details, but if you know anything about Nicholas Sparks (ever watch, ahem, The Notebook anyone…?), you know there’s water, sweat and a whole lot of laughing before things get down to business and steamier than ever.

Sounds pretty sexy, right? Were there any light moments while filming? “Sometimes, in very serious moments…” Efron says. “That’s when you just cannot stop laughing.” Apparently, the scene that cracked them up the most was shooting their first kiss. “We lost it,” Efron says. “If we get loopy or we’ve been up too late, that’s when it happens.”

The Lucky One releases in theaters April 20.

Watch The Lucky One trailer