Anderson Cooper can’t handle all of the Dyngus Day fun. An ill-timed giggling fit has forced the anchor to clarify exactly what he’s calling “stupid.” 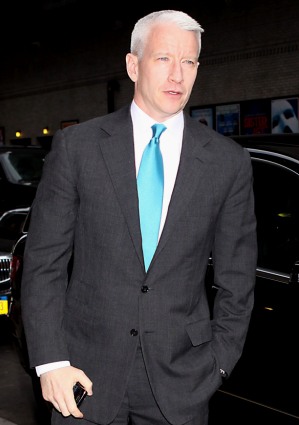 When Anderson Cooper giggles over Dyngus Day pussy willows, the public at large laughs right along — all except for a few celebratory purists who feared the laughter was directed at their time-honored holiday.

Anderson Cooper may be 44-years-old, but give him a script to read that involves pussy willows and a funny-named holiday, and he dissolves into a giggling schoolboy.

Dyngus Day, also known as Easter Monday, was the subject of a recent Anderson 360 RidicuList segment. All was going well until the video clip referenced the tradition of young girls tapping boys of their fancy on the head with a pussy willow branch.

Anderson Cooper, consumed with a growing case of giggles, then became unable to read aloud his portion of the script. While trying to put a stop to the gurgling laughter, the 44-year-old muttered a number of times, “This is so stupid.”

To be clear, Cooper meant his giggling was stupid, not Dyngus Day’s traditions. Unfortunately, some Dyngus Day enthusiasts didn’t quite get the message. Looking to set the situation straight, Anderson Cooper tweeted the following pair of messages Wednesday:

“Just learned some groups believe I called Dyngus Day ‘so stupid’ in ridiculist. I didn’t. I was saying my giggling fit was ‘so stupid.'”

“In ridiculist I called my silly giggle fit ‘so stupid’ not @dyngusday. Sounds like a fun celebration. Genuinely sorry if I offended anyone.”

This is the second time in recent memory Anderson Cooper has lost his composure during a segment, the first occurring in August during a Gérard Depardieu report.

Check out the video of Anderson Cooper’s Dyngus Day giggles for yourself!