Salma Hayek is more than just a gorgeous face and talented actress — she’s also quite the business mogul. 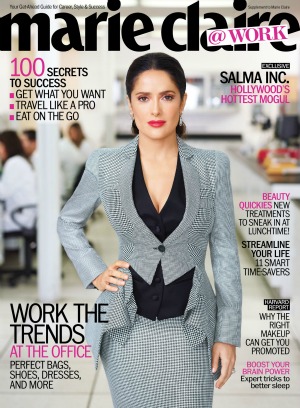 Salma Hayek looks all business on the cover of Marie Claire @Work — and there’s a good reason for that. In addition to being a lauded actress, this busy mom is quite the business mogul, too.

Like many female celebs Hayek started her own cosmetic line, but unlike many celebs she actually developed the line and runs the show. Creating Nuance Salma Hayek, a line of 100 products, the actress debuted her new passion in over 6,000 CVS stores nationwide.

“I don’t know that many people in my position who would actually put that much time into it,” said the 45-year-old. “It’s a lot easier to get a contract or say that you are doing the work when it’s really someone else. I don’t think my own agency — or even I — knew how stubborn I was going to be.”

Despite that stubbornness, Hayek said it was actually her flexibility that led her down this new path.

Salma Hayek: I make my own living, but it’s nice to have help >>

Not everyone else was ready, though.

“Because I have a background in a different field, it can be hard to negotiate and make a good deal for myself. People always underestimate me,” Hayek said of the business world. “But if you stick around long enough, act out of conviction, and try to be honorable in everything you do, good things will come to you. I have seen karma work in this business.”