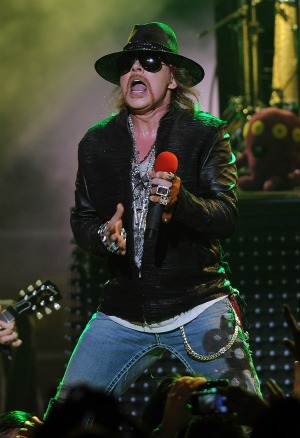 Most musicians dream of one day being inducted into the Rock and Roll Hall of Fame, but Axl Rose is not most musicians. Not only is he turning down his rumored induction, he doesn’t want anyone else in Guns N’ Roses to enjoy the honor without him.

In a lengthy letter to the Hall of Fame committee, Rose wrote, “When the nominations for the Rock and Roll Hall of Fame were first announced I had mixed emotions but, in an effort to be positive, wanting to make the most of things for the fans and with their enthusiasm, I was honored, excited and hoped that somehow this would be a good thing. Of course I realized as things stood, if Guns N’ Roses were to be inducted it’d be somewhat of a complicated or awkward situation.”

Rather than appear on stage with his archnemesis Slash, Rose has opted out — and doesn’t want anyone else to have any fun, either.

“I strongly request that I not be inducted in absentia and please know that no one is authorized nor may anyone be permitted to accept any induction for me or speak on my behalf,” he wrote. “Neither former members, label representatives nor the Rock And Roll Hall Of Fame should imply whether directly, indirectly or by omission that I am included in any purported induction of Guns N’ Roses.”

Still, Rose — who is known for being rather mercurial at best — was gracious enough to be thankful for both the nomination and his fans.

“Regardless of this decision and as hard to believe or as ironic as it may seem, I’d like to sincerely thank the board for their nomination and their votes for Guns’ induction,” he wrote. “More importantly I’d like to thank the fans for being there over the years, making any success we’ve had possible and for enjoying and supporting Guns N’ Roses music.”

He hasn’t always been so gracious about it, though. “Axl Rose… told me in January that he wouldn’t go to the Rock and Roll Hall of Fame induction,” said Forbes contributor Roger Friedman. “He told me he hated Slash, the famed guitarist who co-founded the band with him, and refused to attend… he was obsessed with Slash, claimed that he’d interfered with Axl’s creativity and taken control of the band.”

Sounds like someone still has an ax to grind.