What happens when one reality television personality drops another from his basketball team? Mavericks owner Mark Cuban got frank about losing Lamar Odom. 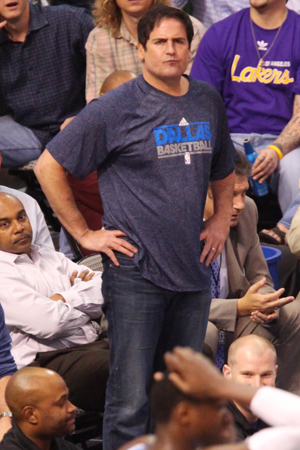 Once his eventual leave from the Dallas Mavericks was publicly announced, Lamar Odom admitted to ESPN that he was “sorry that things didn’t work out better for both of us.”

However, team owner Mark Cuban, who is well known for his honest and often harsh opinions on ABC’s Shark Tank, couldn’t help but agree wholeheartedly. “We tried. It didn’t work. We move on,” Cuban said at a recent press conference, excerpted by ESPN Radio.

“Yeah, I think the winners are us,” he explained, in reference to his remaining players. “He didn’t want to play. He decided to go elsewhere… Now we regroup and go forward. Now you just take the circumstances and make the best of it.”

Cuban acknowledged that Odom is “a very talented basketball player,” but also stated that the player “just went through some issues this year and we thought we could work through them with him and we weren’t able to.”

He elaborated, “Every player goes through ups and downs… We try and put them in a position to succeed. You saw what we did — it didn’t work. And you know, I just asked him, Does he want to go forward or not, is he in or out? I think he thought we were playing poker.”

Yet Cuban knew a discussion was necessary after observing Lamar’s attitude over time. “You can kind of tell sometimes when a guy’s not focused and ready to play,” he said. “If you’re not positive energy, you’re negative energy.”