Forget bird-feeding your child — Alicia Silverstone has so much more to be famous for. Krysten Ritter dishes on her Vamps co-star and why she’s a happy sociopath. 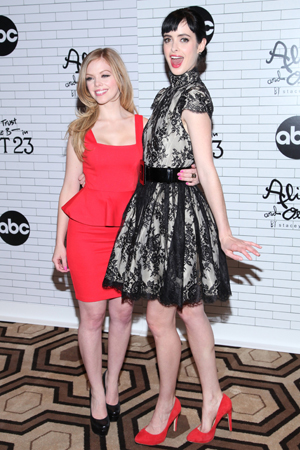 Contrary to her character onscreen, Krysten Ritter has admitted that she never felt attached to Dawson Leery on the Creek. “I think this way, [James Van Der Beek] is my James, and not my Dawson,” she repeated to Vulture. “And he’s such a good sport.”

So who is she fascinated by? None other than the actress with the most unconventional parenting technique, Alicia Silverstone. But it’s not because of how she feeds her child.

“I’ve watched Clueless as many times as humanly possible. Like, I would run home from school to watch it. Like, I can quote it backwards,” admitted Ritter.

Outside Apt 23, Ritter filmed Vamps with the icon of her childhood, due out later this year. “It was the coolest thing to do a movie with her and become friends with her. I always wanted one of those closets like her character had, where you can figure out your outfits? The skirts with thigh highs? And now I have her in my phone. How cool is that?”

Until then, she’s excited to play the sociopathic lead, Chloe, on her new ABC show, Don’t Trust the B—- in Apt 23. Though a challenge, she’s excited to potentially mirror the leading likes of Dexter, House and Frank Gallagher of Shameless.

“I’ve never seen a sociopath [on TV] who’s a female, and it’s just so delicious. I’m so honored to be the first one, if I am. I just love that she has no filters, and marches to her own drummer. She drinks, she has sex, she parties and those are all really fun things to play. I love that she’s part of the great digestive system of New York City… I’m not playing the friend, I’m playing a force of nature. I could probably never find a role as a good as this.”

Krysten Ritter: How to look good naked in Apt 23
Don’t Trust the B—- in Apt 23 pilot review: The new odd couple!
Down for a Dawson’s Creek reunion? Van Der Beek speaks

51 mins ago
by Caroline Greelish