Each team of twelve was halved by battle rounds, and then all four coaches were required to let go of TWO of their musical mentees. Who did Cee Lo save? 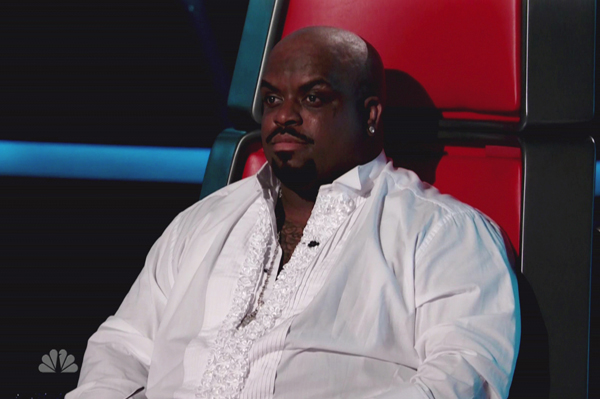 Last night on The Voice, it came time for both Cee Lo Green and Adam Levine to bid farewell to two of their own. With vocal powerhouse Cheesa, former model Erin Martin and Broadway veteran Tony Vincent on the chopping block after America’s vote, Cee Lo was only allowed to save one. (Spoiler alert if you haven’t watched the episode yet!)

To make that decision, all three singers picked up the microphone for potentially the last time, as they selected their own song to beg for Cee Lo’s faith. But the coaches were disappointed that it took them so many weeks to finally sing their best — once it was all out on the line.

“There’s that vulnerability of trying to be trusting. They want to feel like their instinct is right about what coach they chose and you want to take those suggestions to heart,” he said to reporters after the elimination, according to The Hollywood Reporter.

He ended up saving Cheesa, who performed a jaw-dropping rendition of “All By Myself” for the judges. But the coach had nothing but kind words for those he had to let go.

“Erin makes me laugh. She’s so, so unique and so wonderfully strange, like me,” he said. “I’ll miss having that side of myself around.”

He added: “Tony, I just connected to him like a brother, and we celebrated the birth of his new baby and we just were really good friends. He’s accomplished something in the arts that I have not.”

“Do I think that song choice that he selected was the winning one? No I don’t. I was just a little disappointed in that, and I had to be honest,” said the show coach.

However, Cee Lo commented that the judges wouldn’t be able to win The Voice themselves. “It’s not easy to do. You know, we’re here to stay. Those four seats will be here as long as the show is around, but they’re fighting for their lives.”