An Usher death hoax took over the web on Tuesday. Luckily, it’s not true. See how Usher celebrated his life by taking his sons to Disneyland. 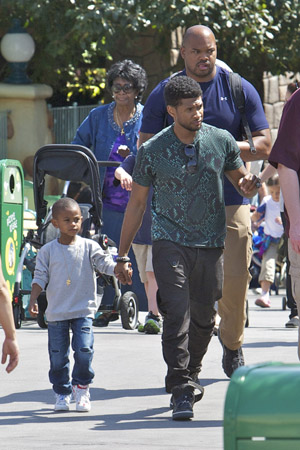 Okay everyone, new rule: If you don’t hear about a celebrity death on SheKnows — or another reputable news website — then it didn’t happen. This method of verification will keep any more celebrity death hoaxes from happening.

And honestly, it gets pretty silly to have to report on these every week.

The victim this time? Usher. The website Global Associated News reported that the sexy singer died in a fiery car crash on Tuesday.

“Usher died in a single vehicle crash on Route 80 between Morristown and Roswell,” the website wrote. “He was pronounced dead at the scene by paramedics responding to the vehicle accident and was identified by photo ID found on his body. Alcohol and drugs do not appear to have been a factor in this accident.”

“The vehicle was believed to have been traveling at approximately 95 miles per hour in a 55mph zone at the time of the accident,” the report continued. “Witnesses have stated that Usher’s car crossed the double lines several times prior to the accident and hit the center lane divider causing the vehicle to flip and roll.”

Oh, and the best part: “Memorial services for Usher have not yet been announced. The service is expected to be a closed casket funeral due to the severe head trauma.”

GAN might want to get some different sources: Usher spent much of Tuesday with his sons at Disneyland in Anaheim, California. If that wasn’t enough proof, he also tweeted his “living” status to fans.

“I must’ve died and went to heaven…Alive and cold kickin a**!!” he tweeted. “Never scared, never dead…Just #Lookin 4 myself. Livin legend!”

So, there you have it: Usher is alive and just full of confidence.