Miley Cyrus is having relationship problems — on screen. In her latest film LOL, the actress struggles with some serious heartbreak. Her character learns firsthand that love isn’t all it’s cracked up to be. 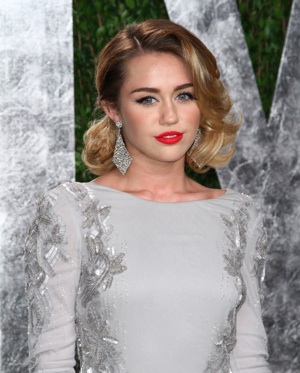 Miley Cyrus headlines a new coming-of-age drama that centers on the turbulent topic of love. The 19-year-old is joined by Demi Moore, who plays her longsuffering mother, and Twilight‘s Ashley Greene, as her high school nemesis.

Miley Cyrus has a hot date with a Marine >>

The title LOL has two meanings. It references the name of Cyrus’ character Lola, whom everyone calls Lol. And it’s a nod to her character’s main means of communication — shorthand text.

In her world, “LOL,” “WTF” and “OMG” are just some of the phrases she uses on a daily basis.

Cyrus plays a girl dealing with her first heartbreak. She loses one boyfriend but quickly finds another, who’s been under her nose the whole time. Unfortunately, because of her previous encounter, she’s left with serious trust issues. Lol has a classic case of once bitten, twice shy.

Miley Cyrus: Settle down, it’s a topaz not a diamond >>

LOL tackles high school romance, set against the backdrop of Facebook and Twitter. Throughout the trailer, we see Cyrus update her relationship status multiple times alerting the world of her latest woes. Do these sites help or harm her lovelife?

Check out the official trailer for LOL below:

LOL is written and directed by Lisa Azuelos. It co-stars Douglas Booth, Gina Gershon and Marlo Thomas. The film opens in limited release May 4.

What do you think of Cyrus’ new film? Will you see it?