Tony Romo’s baby boy has arrived! Forget a race to the altar, this quarterback has not only beat ex Jessica Simpson down the aisle, but scored the first point in the parenthood arena. Not to fear, she’s still got a leg up on another couple! 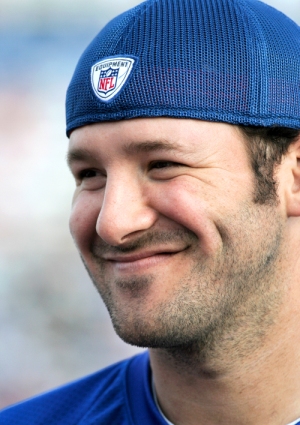 It’s a boy for Tony Romo and Candice Crawford! The couple have welcomed their first child together, a healthy bundle of joy named Hawkins.

Actor Chace Crawford, brother of new mom Candice Crawford, was there for the birth of his nephew Hawkins. The Gossip Girl actor commented previously of Tony Romo, “He’s over-the-moon excited about it.” The actor also said, “He’s just such a wonderful person… he was born ready to have a family, you know what I mean? So it makes perfect sense.”

Conversely, Jessica Simpson has yet to speak publicly about the arrival of Tony Romo’s baby. The singer, who dated the quarterback from 2007-2009, is currently expecting a child with fiancé Eric Johnson.

Not only did Tony Romo’s baby boy make his arrival into the world before Jessica Simpson’s bundle of joy, but the 31-year-old and Candice Crawford beat his ex to the altar! The pair wed on May 28, 2011, while Jessica Simpson and Eric Johnson have opted to wait until after their child’s arrival to go forward with a wedding.

Jessica Simpson may be getting trounced in the major milestone department by Tony Romo, but she’s fairing slightly better when pitted against ex-husband Nick Lachey, also currently expecting his first child! Though he and Vanessa Lachey (formerly Minnillo) exchanged vows in the summer of 2011, their baby isn’t expected to arrive until after Simpson’s.

Good thing it’s not a competition, right? Congratulations and best wishes to all the exes!