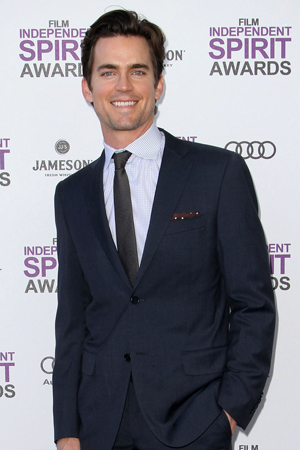 Yes, you read correctly. Tonight is the night when two worlds collide, when White Collar hottie Matt Bomer crosses over into Glee territory with song, dance, and a smile worthy of local fame after filming a free credit rating commercial.

Bomer walks into McKinley High as Cooper Anderson, the long lost older brother of Blaine (Darren Criss). He confesses that guest starring on the show has been a dream of his — even if he’s written in to play a complete nightmare.

“Ryan [Murphy] called me one day and asked if I wanted to play Darren Criss’ brother on the show,” he told The Hollywood Reporter. “I was floored and said absolutely. He pitched a story line, and I was literally crying from laughter hearing what a hot mess this character was and how much fun it was going to be to get to play him.”

So who exactly is Cooper Anderson? “He’s somebody who has really strong convictions and opinions that are completely misguided and ill-founded, but his heart is in [the] right place,” explained Bomer. “He’s back in town to rekindle a relationship with his brother, and he really wants to help him and his classmates skip out on some of the flames and arrows of the business that he’s had to endure.”

Despite his good intentions, the advice he offers isn’t exactly in the high schoolers’ best interest. “Unfortunately, the wisdom he’s dispensing is really illegitimate and awful,” laughed Bomer. “Point to whomever you’re talking to, especially if it’s a dramatic scene, because otherwise the audience isn’t going to know who you’re talking to and you have to know that you’re being very direct, and that’s what made movies like Schindler’s List really great (laughing). And in comedy, you have to wink to get a laugh out of people!”

Bomer didn’t take any of his character’s pointers to heart when transitioning from his normal dramatic role to a comedic guest spot. “Comedy is harder work in some ways in that you really have to ground all the humor, otherwise it’s just superficial. I had a great time getting to be silly and play somebody whose perspective was so skewed.”

Watch a behind-the-scenes video below: